Thurrock Local History Society 21 October 2017
The Poor Law – how we treated our poor, by Martyn Lockwood 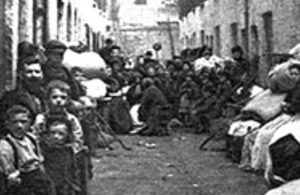 At our October meeting ex policeman Martyn Lockwood enlightened us on how we have treated the poor in the past. The Reformation in 1534 meant that the poor could no longer receive help from the monasteries and they turned to the parish. The old system had saved many from starvation and there was social unrest, with an increase in crime and begging. Various legislation came about in 1601 by Queen Elizabeth I. Beggars had been ill-treated, branded, whipped and sent out of villages to roam the countryside.

In the 16th century parish registers started to keep records; funds were collected for the poor, aged and ‘decayed’, known as the Vagabonds Act. Overseers were appointed to collect the poor rate, but it was not popular. The 1601 Poor Relief Act covered the appointment by the vestry of two overseers, a parish constable for law and order and people to maintain the highways. Relief was dispensed – indoors in the workhouse and outdoors with food or clothing. Workhouses were at first a cottage in a parish. The able bodied were set to work on jobs such as picking oakum, used for caulking on ships. Children became apprentices for payment and some were sent to sea.

The 1662 Settlement Act established the parish where each person belonged (repealed in 1834). In 1723 a new act was set up for poor relief on a larger scale, parishes grouping together to build workhouses, ran by the Board of Guardians and funded by a local poor rate. There were serious problems after the Napoleonic wars, ex soldiers being forced to beg and unemployment was widespread. There was rioting and a Vagrancy Act was set up to control beggars.

New regulations in 1834 stipulated that parish workhouses should be worse than a home situation and a workhouse test was devised to test between the deserving and undeserving poor. Our local workhouse was built in Orsett. Staff lived on the premises and there were strict rules and regulations for the inmates. Their food was basic, with silence at mealtimes. Families were split up, although parents saw their children on a Sunday. Many children had no family and were instructed at school for three hours each day; they were taught the three Rs and Christian religion.

By 1881 most workhouse inmates were agricultural labourers and various punishments were inflicted for small misdemeanours. There was no provision for tramps and beggars, although they could stay overnight after doing a day’s work; their clothes were fumigated and they were locked in cells overnight. The inmates celebrated Christmas Day, being served Christmas pudding and roast beef, some being entertained by parish ladies singing.

The OAP act in 1908 gave 5 shillings a week at the age of 70. The workhouse system declined and by the 1930s local councils took over welfare. This was a sobering talk and although the poor will always be with us, at least the workhouses are no more, most of them being turned into infirmaries.

Our next meeting is at 8.00pm at the Adult Community College, Richmond Road, Grays on Friday 17 November when our speaker will be Kevin Diver, his illustrated talk entitled “A-Z of Thurrock History”. Visitors are welcome.