A spokesperson for intu Lakeside said:

“The Essex Fire Service responded to an incident in one of our car parks this afternoon. Firefighters were on site very quickly and thankfully no one was hurt.

“Car Park 5 will remained closed for the time being and we are working hard to minimise any disruption to our customers.”

Firefighters were called to extinguish five vehicles on fire in a car park.

Fire crews managed to extinguish the fire by 2:15pm.

The fire started in the engine of one vehicle and spread to four others nearby. The vehicles have been badly damaged by the fire, but there was no injuries reported.

A CAR is on fire at Lakeside.

The car is at the far end of one of the open car parks close to the bus station.

It is unsure if the fire has spread to other cars.

The fire service have been called. 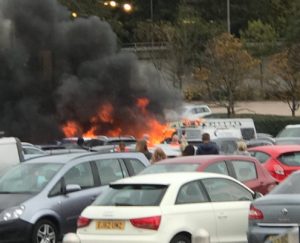