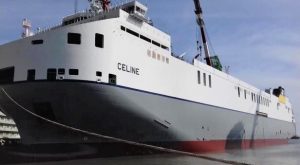 She is the first ship in a series of eight ships by Hyundai Heavy Industries in South Korea and operates on CLdN’s weekly service calling at Purfleet, Rotterdam, Zeebrugge and Dublin.

The new ships offer a flexible deck configuration and can cater for a mix of trailers, containers, high and heavy cargoes, cars, vans and trucks.

CLdN’s C.Ro Ports division is simultaneously expanding its terminals to cater for the larger vessels, with expansion planned for Purfleet.