Stonehouse Lane in Purfleet to be made one way

By Staff Reporter on November 7, 20173 Comments 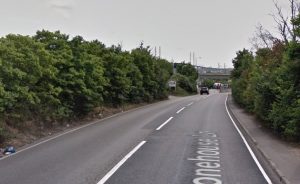 1) Notice is hereby given that Thurrock Borough Council, in exercise of the powers conferred by sections 1, 2, 4 of Schedule 9 to the Road Traffic Regulation Act 1984 (“the 1984 Act”) and of all other enabling powers and after consultation with the Chief Officer of Police in accordance with Part III of Schedule 9 to the 1984 Act, intends to make the above named Order (“the Proposed Order”).

2) The general effect of the Order is:

a) No person shall cause any motorised vehicle to proceed in that length of road known as Stonehouse Lane, Purfleet in the borough of Thurrock which extends from its junction with London Road and A1090 Purfleet by-Pass to a point 434 metres north of that junction in a direction other than from north to south

b) Cause any vehicle proceeding in a easterly direction along the access road at the point 434 metres to the north of the Stonehouse Lane / London Road / A1090 Purfleet By-Pass junction to make a right turn manoeuvre onto Stonehouse Lane and proceed in a southerly direction.

3) A copy of the Proposed Order together with the plans will be available for inspection for a period of 21 days at the Civic Offices, New Road, Grays, Thurrock, Essex, RM17 6SL, during normal office hours and also on Thurrock Council’s website, www.thurrock.gov.uk.

4) Any objection to the proposed Order must be made in writing, giving the grounds on which it is made, and sent to the address in paragraph (3) or sent via email to capital.traffic@thurrock.gov.uk to arrive on or before 19th November 2017. Any objection may be communicated to other persons who may be affected.

The council proposes to implement one-way traffic with a contra flow cycle lane on Stonehouse Lane, Purfleet as part of the £5m programme of cycle infrastructure improvements. The proposed one-way movement design presents a solution for provision of a safer environment for pedestrians and cyclists, encourages sustainable transport mode and it also takes into account a poor structural condition of Stonehouse Lane carriageway.

The structural failures of the carriageway are caused by the chalk sub-base which was not being constructed to take daily usage from increasing HGV movement. This has already lead to several section of the road been reconstructed and further sections require more extensive repair works to avoid expected repeated failures due to the current extensive usage of the road. The design has been consulted with the Cabinet Member for Highways and Transportation, with the ward members and with the Purfleet Community forum.