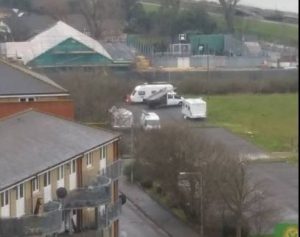 THE High Court has issued an injunction which will help prevent unauthorised encampments at various industrial and park areas within the borough.

Basildon Council applied for the injunction on Tuesday 10 October and it was made today (Monday 6 November).

Since the beginning of 2016 to date, a total of 77 encampments were recorded, most of which were located in Basildon’s commercial areas. Also, since April this year, over £40,000 has been spent on the disposal of fly-tipped waste following eviction of traveller encampments.

The council has also seen incursions on publicly owned land in the borough. Recent examples include Rushley Park and St Nicholas Lane where significant fly-tipping cost the council thousands of pounds to clear up.

Cllr Gavin Callaghan, Basildon Council’s Committee Chairman for Policy and Resources, said: “I welcome the decision from the High Court to grant our application for an injunction.

“This sends the clearest message possible to anyone and everyone, that we are committed to dealing with planning illegalities and are doing everything in our power to ensure the full force of the law is used.

“We are continuing to direct additional resources to enhancing our enforcement capacity to tackle these kinds of incursions, which are a blight on our neighbourhoods, communities and businesses.

“This administration were clear we wanted to extend the boundaries of the original drawings to include persistent problem areas such as Church View Road and Rushley Park. The steps taken today show our commitment to this issue and will be welcomed by borough residents, particularly those in Pitsea and Laindon who will benefit from this change.

“Officers have worked around the clock to make this happen and I’m grateful to them for their hard work and persistence.”

A Basildon Business Group spokesman added: “We are grateful to Basildon Council for working with its partners to secure this injunction which we know will be welcomed by the local business community, a number of whom have been negatively affected by the regularity of the illegal encampments.

“The injunction will undoubtedly have a positive impact for businesses and their staff operating in one of the key business locations in the county.”