AFTER a week off Orsett were back in action in the county cup against Hannakins, a team from the Chelmsford division. After a successful run in the competition last year we were determined to go out and start our cup run well with a dominant performance. 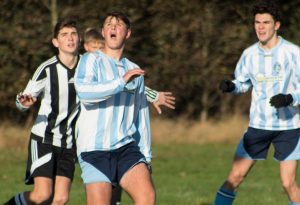 Orsett found ourselves on the back foot at the start which hasn’t been the story for previous performance. Hannakins were first to the ball in the middle as Orsett struggled to get started. We found ourselves second to every ball and not being able to release the ball quick enough and set the strikers off on goal. However, one player that was working in the middle was the mighty Holden as he did a good job of covering the midfield and tidying up some poor mistakes made by our midfield.

As pressure started to build, Hannakins were given a foul on the edge of the Orsett box and a neat free kick found the bottom corner after going across the face of goal causing the defenders and goal keeper problems. Shortly after, Ian decided to show his tactical genius by adding bossman Ben, big man Bradders and speed dream Bobbie Maclean. This opened the game and pushed it more into Orsett’s favour and soon after the the Haydinator found the back of the net and we went into the break 1-1.

We knew that the performance was not up to standard and at half time we started to question the character of our first half performance as we knew we had the technical ability to turn this team over and give them some of the OPR sausage.

As the second half kicked off, we started it very much as we started the first, not in control! Moreover, Hannakins ended a move by scoring again leaving Orsett on the back foot. Orsett got back into the game quickly but Hannakins hit on the counter and the winger knocked the ball down into our third and skipper went to meet the ball but ended up getting more of the player than what he would have liked to and none of the ball, sending the poor boy flying. And as Henri’s curse echoed the pitch, the referee entered into his pocket showing the yellow card.

We resumed play and Orsett saw a quick break with a lovely ball from the haydinator that found the bossman for a very composed finish levelling up the score. Orsett gained confidence and Ben wasn’t finished there, pulling out the tricks that sent the opposition all over the place. With 20 minutes left Hannakins found another good ball ending with the ball in the back of net, leaving Orsett down once again. Trying to bounce back we got caught out again and Packer ended up going through the back of the striker leaving the ref pointing to the penalty spot. Vin, obviously getting to player on the spot, intensely looked the him up and down and saw that his shot was going nowhere the goal. This led to a fantastic save and sent shock waves through the OPR spine.

The last 10 minutes really showed everyone who we are. With a brilliant long shot for the star bossman today and dominant header from the haydinator saw us 4-3 up! We saw the last few minutes out well and we did what we needed to do to go through to the next round.

Maybe the best performance but we showed a lot of character to boss through the final minutes and get a result, we know we can perform better but to win and play how we did is only a good sign.