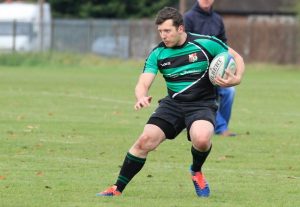 THE lead up to this crucial game in Thames’ league season was hampered by injuries and early on in the week with no complete front row it was looking ominous for Thames but with some friends of the club offering their services Thames were able to start the game competitively in the forwards. With Eaton Manor sitting only one point below Thames in the league the game was all about the win in this first season meeting between the two sides.

From the off it was clear that both sides had come to play and the initial few minutes saw both sides testing each other out. Thames had slightly better territory possession and from an awarded penalty the ball was moved quickly. Mark O’Connell came from a deep diagonal and was unstoppable crashing over the line to open the scoring. Rhys Dell taking over the kicking duties for the day added the extra two points with ease.

Manor came back at Thames and crossed the line themselves minutes later. Manor made several strong phases through their forwards and then with a long wide pass skirted round the Thames defence to score in the corner but couldn’t manage the conversion. Thames was rallied by the visitors try and from the restart they recycled the ball quickly using their quick hands to great advantage. Winger Kyle Munro was following the play and joined the attack 22 metres out, he sprinted forward then turned the cover tackle inside out with a good side step finishing behind the Manor try line. Dell once again was accurate with the boot.

Manor were attacking hard and forcing Thames back, some desperate defending lead to Thames giving away a penalty approximately 10 metres out. Manor played their penalty but spilled the ball backwards; Thames’ Liam Smith was first to the bounce of the ball and deftly passed on to Riaan Booysen. Booysen sprinted down the touch line getting close to the Manor 5 metre line he looked for support and found Smith on hand to finish the move he started.

Thames leading 19 – 5 with 10 minutes to half time Manor struck twice in quick succession. Both Manors’ tries came from quick fast play and some poor tackling from Thames but none the less Manor’s tries were well taken and very much deserved. As the half time whistle blew Thames took a narrow lead of two points into the break 19 -17.

The second half saw both sides trading attack and defence equaling each other out; but it was Max Clarke who opened up the Manor defence to get the next try, when he was set free down the wing. Dell added the two points easily. Dell had been involved in so many good phases of play for Thames so when he darted over the try lineafter a penalty only minutes later, it was a well-deserved try and put Thames ahead with some clear space between the two sides. Thames were now on the front foot and a third unanswered try came from James Going who broke free from a strong maul by Thames, he sprinted down the centre of the pitch out stripping the chasers. Kyle Munro took the conversion adding the extra two.

Manor was still making a good game of it and edged their way towards the Thames try line. The game had been played on the edge with some minor skirmishes but as Manor set themselves to play out of a Maul, one of their forwards reacted to being cleared out of the maul and Thames’ Sean Loughran reacted to the foul play, with both players being given 10 minutes out and ending their participation in the game with just 7 minutes to play. From the restart Manor managed to find some space and ran in behind the posts with the conversion to follow.

Thames weren’t prepared to let Manor have the last say in the game and from the restart they applied pressure forcing a turnover. The ball was spilled onto the floor by Manor and Clarke was first to it, he hacked on with the ball crossing the try line and then it was a foot race to the ball. Clarke’s pace was much greater and he dabbed down. Clarke turned and added the conversion to his own try.

As the final whistle blew Thames had taken the win 45 – 24 but knew they had been a true battle, the return fixture promises to be a great game. Thames awarded their man of the match to Max Clarke for his outstanding performance all over the pitch.