Countdown to Christmas at Vue Thurrock

AS the most magical time of the year draws closer, an enchanting Christmas tale is being brought back to the big screen at Vue Thurrock this December.

Nutcracker, the story made famous by Tchaikovsky’s famous score, will be the star attraction this month, with not one but two theatrical interpretations being given the big screen treatment.

On Tuesday 5th December, viewers can see The Royal Opera House put its own unique spin on the traditional Christmas tale, as Clara’s wooden nutcracker doll comes to life at the stroke of midnight. With its festive period setting, dancing snowflakes and enchanting stage music, Peter Wright’s stunning adaptation ranks as one of the most enduring and enchanting versions of the Nutcracker.

For guests who can’t wait that long, they can catch the Bolshoi Ballet’s production of the classic tale two days earlier on Sunday 3rd December. Featuring some of the Bolshoi’s greatest artists, such as Denis Rodkin, Anna Nikulina and Andrei Merkuriev, this adaptation is certainly one to whet the Christmas appetite.

Johnny Carr, Alternative Content Manager at Vue UK and Ireland, commented: “The Nutcracker is synonymous with Christmas and we’re extremely excited to be able to broadcast not one but two outstanding versions of this enduring tale.

“There’s also a great deal of added quality in the rest of our line-up, which includes Young Marx by the National Theatre and an opportunity to celebrate the New Year with the Berlin Harmoniker’s News Year’s Eve Concert.” 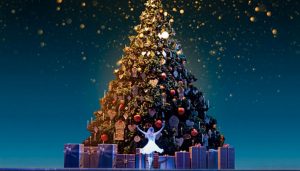