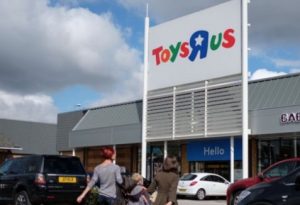 TOYS R Us has confirmed plans to shut “at least” 26 of its stores in the UK, putting up to 800 jobs at risk.

But it has been confirmed that Harlow and Thurrock will be saved.

The toy chain said the closures would start in spring next year and that there would be “no disruption for customers” over Christmas and New Year.

Managing director Steve Knights said the chain’s “warehouse style stores”, which it opened in the 1980s and 1990s, had become “too big and expensive to run in the current retail environment”.

It currently employs 3,200 people and said it would, where possible, aim to redeploy staff affected by the shop closures.

Toys R US said online shopping would be unaffected by the plans and that there would be no changes to its returns policies or gift cards across the festive period.

Mr Knights said the closures had been “a difficult decision” but said the company needed to take “strong and decisive action” to try and turn around the business.

The UK business is understood to have made a loss for seven out of the past eight years of trading.

Mr Knights said the firm had instigated a company voluntary arrangement (CVA), which enables a company to agree a plan to pay the money it owes while continuing to trade.

The CVA proposal will be voted on by creditors on 21 December.
“If approved by the creditors, the CVA plan would substantially reduce the UK company’s rental obligations and allow the business to move to a new, viable business model,” Mr Knights added.

Toys R Us in the UK is owned by its US namesake, but run as a separate financial entity.

The US chain filed for bankruptcy protection in the US and Canada in September, but a spokesman for the retailer said the two events were not connected.