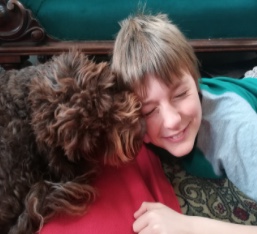 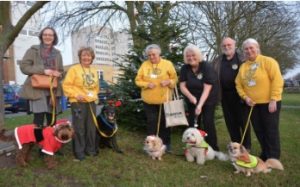 RSPCA inspectors went into the South Ockenden puppy farm in December 2013, removing three adult dogs and three litters all thought to have been bred for the Christmas market.

Branch trustee and dog rehoming coordinator Kathy Butler said: “The litter came in around Christmas time. They were unsold and had been living outside in sheds and barns, many in appalling condition. In fact, little Rolo (pictured) almost didn’t make it.

“One of the nurses at the vets fostered him to give him round-the-clock care and, thankfully, he pulled through.”

When little Rolo was 12-weeks-old he went to live with Claire Dean, her husband and her two sons – 13-year-old Robin and Oliver, 19 – in Southend-on-Sea.

“If it hadn’t have been for the RSPCA taking these dogs in, I’m sure Rolo would have died,” Claire, 53, said. “Two of his siblings had already died of E.coli and he was so ill.

“He was fostered for a week over Christmas by one of the lovely vet nurses and we collected him on 2 January 2014 – although he was much better he still weighed only 2.5kg and needed much more TLC.”

Now, aged four, Rolo is the picture of health and happiness. And, after being rescued and given a second chance at life, the crossbreed is now giving something back via Pets As Therapy (PAT).

Copywriter Claire added: “He is now completely well, thriving, a bundle of fluffy joy and such a sweet-natured fellow.

“He absolutely loves to say hello to everyone and nearly every dog. It’s funny, when on a free run, he always says hello to the owner as well as the dog.

“As a dog, he is very friendly, fun, clever and professional – he knows when he is working and how to behave.

“But when not at work, he can be a mischievous boy, but also extremely funny! He is a ball thief – in fact he will steal anything that is clothing, footwear or cushions, and if the back door is open will trot out in front of you, with whatever he has taken, hoping for a chase!”

But he also has his serious side. Rolo visits Southend University Hospital every week as a PAT dog, helping patients through extremely difficult times in their lives.

Claire, who is also a volunteer for Guide Dogs, explained: “Even before we ever had a dog, I remember saying to a friend that if we ever were lucky enough to have our own dog, then I would love to share, knowing how much joy they bring, by doing PAT. And so I did!

“Rolo (and I) go to Southend University Hospital every week. We have been visiting the Oncology Ward, Elizabeth Loury, for more than two and a half years and the Neptune (Children’s) Ward for 14 months – in fact we are the first and only dog partnership allowed in the children’s ward – I feel very flattered!

“Sometimes we go to one of the stroke wards, depending on time, but we always go to visit specific patients, if asked, wherever they are in the hospital, no matter how long we have been there.

“It can take some time to get to where we are actually planning to go because of people wanting to stroke Rolo and talk to him, as they see him along the corridors. Many people are surprised to see a dog in the hospital. Rolo goes up to the patients and is just incredibly friendly…and calm.

“Rolo also lifts the mood of visitors and most definitely the staff – and has become quite well known now in the hospital. It is very special to hear if patients have been talking about Rolo and asking when he is coming in next.”

Deborah Dow, CEO of PAT, said: “We’re so proud of all of our volunteers, without whom PAT wouldn’t exist. However, when you’ve had a tough start in life and you go on to bring joy and comfort to so many people’s lives – it’s a wonderful thing.

“Well done Claire and Rolo. You’re both inspiring examples of what volunteering with PAT is all about.”

As well as his incredible work at the hospital, Rolo has also taken part in the Read2Dogs scheme at a local primary school, visits residents at a nearby care home, and attended a talk at a school as an ambassador for the RSPCA to thank the children for choosing to support the charity’s work. Claire and Rolo (pictured) were also given an award for their volunteer community work.

Kathy added: “I’m incredibly proud of Rolo and how far he’s come. When we saw that little bundle of fluff being carried out of that horrendous place, so weak and vulnerable, I’d never have believed he could be doing something like this just a few years later.

“He’s a wonderful example of what rescue dogs can achieve when they’re in the right environment with a loving family – and when they’re given the opportunity to be themselves.

“I’d like to thank Claire for giving Rolo such a wonderful life and for giving him a purpose.”

This winter, the RSPCA expects to receive 2,000 calls a day about animals who, just like Rolo as a puppy, are in desperate need at Christmas time. To make sure the RSPCA can help many more dogs like Rolo this festive season, please make a donation to the RSPCA’s Kindness at Christmas Appeal by visiting www.rspca.org.uk/winterappeal.