Rock and roll comes to Herringham

HERRINGHAM Primary Academy recently hosted their Rocksteady Music Concert. The concert saw performances from pupils who had been given the opportunity to learn a musical instrument and work towards the end of term concert, to showcase their new skills.

Four bands performed this time; Rocky Road, Rocking Lions, Golden Nuggets and Unicorn Squad. Some had up to 9 band members on various instruments including drums, keyboard and guitar with vocal accompanists. 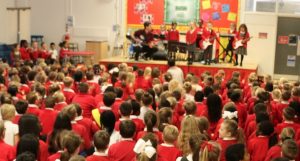 Mr Stephen Moon, Assistant Head of School, said “The pupils did really well during their performances. I think they were very brave! Rocksteady Music School is available to any pupil and more information can be found on our letters home page.”