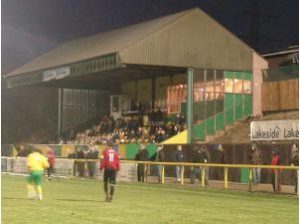 A trip to a cold and wet KNK stadium for Thurrock ended up as a game of two halves with a goal-less first half followed by five second half goals.

Tooting & Mitcham get the first sight of goal as a thirty yard free kick dips just over Jake Jessup’s goal. But soon after Michael Pindy breaks away down the right wing and sees his low cross half cleared and intercepted by Remi Sutton who comes forwards but can only gain a corner. Tooting are away on the right wing and halted at the last moment by a combination of Jessup and David Agboola.

Joe Christou battles in the middle of the pitch to win the ball which is picked up by Charlie Stimson to cycle out to Joel Nouble, Nouble drops a shoulder and ghosts past the full back and curls a shot just wide of the far post.

Thurrock are taking the game to Tooting who seem content to soak the pressure and look for a counter attack on the break. Christou’s throw finds Stimson who brings the ball down with his right foot and spins and shoots with his left forcing Matte Pierson to punch the ball behind for a corner. Tooting break from the corner and find a shot from thirty yards that is wide of the target. In the final moment of the half Isaiah Jones again manages to get clear from the halfway line with Sutton in close attendance. Jessup comes out to narrow the angles forcing Jones to shoot wide.

From the restart Nouble finds himself hemmed in by three defenders but still manages to find Pindy whose shot is deflected for a corner that again comes to Nouble to this time set Stimson on the edge of the D but again Pierson saves.

It is Tooting who break the deadlock from another break, this time by Mike Dixon who slots past Jessup. Thurrock immediately respond as Pindy finds an angle but the shot is blocked and Christou is first to the rebound but is wide of the goal. Dixon gets his and Tooting’s second less than five minutes after the first as once more Jones is sent away on the right wing where he is able to pick out Dixon to shoot from ten yards and score despite Jessup getting a hand to the ball.

Pindy is sent through and back heels the ball to Reece Morgan whose fierce ball in takes a touch which diverts the ball enough to prevent Stimson getting a clean touch and the ball bounces off him and over the bar.

Thurrock’s woes increase though as Morgan is dispossessed and Dan Clements is able to come in from the left to make it three. There are still twenty five minutes on the clock as Sutton takes a teasing free kick that beats everyone despite Stimson’s despairing lunge at the far post.

With ten minutes left Clements get his second. Morgan stretches to keep the ball in play which has the unwanted consequence of putting Clements into space and time. Jessup gets a finger tip to the lob but not enough to keep the ball out.

As ever, Thurrock continue playing to the final whistle and in the ninetieth minute get a consolation goal. Ronnie Winn powers in a corner which is met by Claudio Ribeirio-Goncalves and his header smashes into the crossbar and back to Ribeirio-Goncalves who makes no mistake second time around.