Battling Boro Pick Up A Point 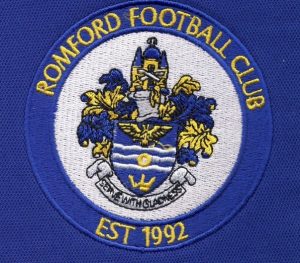 Romford could only manage a draw in their battle for survival as their points tally finally reached double figures.

With Christmas coming up Romford could have done with some festive cheer and things nearly started well as Sonny Shillings and Ayo Olukoga linked up well down the right wing, but Jonathan Nzengo could only head the cross just wide in the seventh minute. At the other end Stephen Reynolds had to be alert in the Boro goal, saving well from Matthew Green four minutes later after Romford failed to clear a Mildenhall corner. Neither team could get control of the game while some wayward passing stopped any good counter attack chances and a Jonathan Nzengo left wing cross that just eluded Garret Kelly at the far post was pretty much the only goal action during the first half until Romford earned a corner in the thirty-eighth minute. Harry Daly whipped in an out-swinger that Danny Cossington met with his head after a tremendous leap and the ball looped into the far corner to give the Boro the lead. Unfortunately for Romford the lead only lasted three minutes as Mildenhall earned their own corner that was crossed low and missed by everyone before being turned back across goal and scrambled home by Jake Kerins.

Six minutes into the second half Romford had a glorious chance to re take the lead, but after Kelly found Shillings scampering through the winger fired high and wide when one on one with the keeper. Three minutes later and only a fine finger tip save denied Romford’s Ayo Olukoga when the full back hit a rasping twenty-five yard left footed drive. Romford’s third great chance in four minutes came from the resulting corner when Cossington was left unmarked but headed just over the bar. Despite Romford’s early pressure Mildenhall got back into the game but neither team created anything until the last few minutes when a left wing cross was flicked towards goal and saved by Stephen Reynolds and just as it looked like the forward had an easy tap in debutant Teddy Perkins, son of ex-Boro man Steve Perkins got back to make a fantastic goal line block. In injury time Kerins was shown a red card after a foul and an earlier yellow card for kicking the ball away before Romford nearly stole the points when Chris Taylor flicked on a cross and James Ishmail was just unable to bundle the ball home at the far post.

It was another point for Romford but with Norwich winning they are now six points adrift at the bottom of the league.