BRITISH Transport Police are appealing for information following an assault on a member of staff on Wednesday 27th December at Chafford Hundred Railway Station. 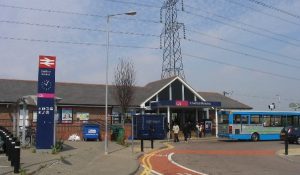 A spokesperson for British Transport Police said: “We were called to Chafford Hundred station in Essex shortly after 3pm on Wednesday, 27 December, following reports of a member of station security staff being assaulted by two men.

“Our officers attended and spoke with the victim, a 49 year old man, who had received an injury to his nose.