Police Officer at Lakeside comes to aid of lady in distress

AN officer from the Essex Police Operational Support Group has been praised by a member of the public after coming to the aid of a woman in distress.

Pc Jim O’Connell was assisting with a Project Servator deployment at intu Lakeside when he spotted a woman, who had recently undergone surgery, struggling to walk.

Without a second thought, the officer rushed over to lend a helping hand. 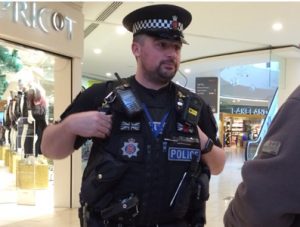 It was only after chatting to the woman that he learned she had recently been released from hospital and was braving the crowds to do Christmas shopping.

The woman later got in touch with us to praise the officer for helping her.

Jim said: “It was my pleasure to be able to help the lady. I acted as any other officer would have in the same situation seeing someone struggling in visible discomfort. Although it was just a small gesture, hopefully,I helped to make her day a bit better.”