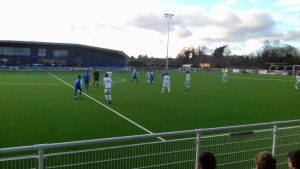 A battling Romford performance saw them capture all three points as they opened 2018 with a win that also hauled them off the bottom spot. Jay Knight was able to put away two chances but the points were also won by the whole team putting in a solid shift to get the result that could kick-start yet another Romford revival.

The Blues have blown hot and cold this term but went into the game having drawn two and lost two from their previous four league games. A winning start to 2018 would mean the Blues could put aside that winless run and they certainly came out of the blocks looking to get into the Boro box. Grays won two early corners, both taken by Glenn Poole and both reaching Kieran Bishop who had one shot blocked by the Boro defence, the other forcing Stephen Reynolds to pull off a reaction point-blank save. Bishop was soon serving as provider when he delivered a cross from the right that Jamie Slabber narrowly headed over. Ten minutes in and it looked only a matter of time before Grays would break the deadlock. Romford’ manager Paul Martin called out instructions to his team to tighten up and they did so instantly which temporarily blunted the Grays offence.

Having been under the cosh Boro then went on the attack as Ayo Olukoga worked his way into the Grays box but had his shot charged down by Joe Simmonds. It was the first bit of action the Grays glovesman had been involved with and Olukoga then went even closer with a long range effort that may have caused Simmonds problems if it had been a bit lower as he frantically back peddled, couldn’t get anything on the ball, which ended up landing on the roof of the net having only marginally missed landing in the top left hand corner.

Grays pushed their defence line up, stifled Romford’s forward play and started to dominate in midfield with Poole delivering decent balls to his front men, who kept the Boro defence on their toes. The Blues were not able to create much up front and it was the visitors who broke the deadlock in the 21st minute when a high ball from midfield allowed Knight to charge past the Blues defence, gain possession of the ball, before lashing it past Simmonds.

Jamie Stewart said in his programme notes that Grays need to start killing games off by taking their chances. Grays certainly had most of the first half possession but on finding themselves a goal down now tried to get the ball into the Boro box. Bishop sent over a dangerous cross that Reynolds came out and caught. It was a timely intervention as the ball was heading towards an unmarked Slabber. The Boro stopper showed safe hands on a number of occasions with the pick of the bunch coming in the 36th minute when he acrobatically tipped away a powerful Bishop shot.

Romford closed the half with a couple of long balls reaching the Grays box before being cleared by Jack Fowler; a Billy Coyne free kick floated towards the Grays goal until Ryan Mahal rose highest amongst a group of Romford players and headed the ball away.

Boro increased their lead inside two second half minutes as a ball found Knight, who despite having his back to goal when he received the ball, then turned and rifled a right-footed shot between Simmonds and his left hand upright. It meant that Romford were in the driving seat but then on 51 minutes the Blues reduced the deficit. Poole did the damage, picking up a ball just outside the box and then striking a sweet shot that bent past Reynolds.

The pendulum now swung back in Grays’ favour with Bishop narrowly poking a shot into the side netting and then going even closer with an outrageous back heel that beat Reynolds and clipped the post. Boro were up for the scrap and once again tightened up at the back with Olukoga, Mvemba, Cossington and Finneran all putting in tackles and blocks to keep Boro’s advantage. So tight did the Boro defence become that Reynolds only had to deal with crosses although did have to show some bravery in the closing minutes after Richard Halle played in Bishop who moved unhindered towards goal until the Boro stopper dived at his feet to claim the ball. Slabber had a shot hooked off the line by Cossington as Romford showed some grit and resilience to soak up the pressure.

At the final whistle the Romford players and fans all celebrated as with Cheshunt starting the New Year losing at Hertford Town meant that started 2018 by lifting themselves off the bottom.