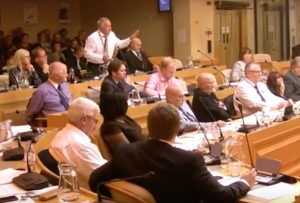 AN INVESTIGATION into the conduct of a Thurrock UKIP councillor during a council meeting has entered its fourth month.

Ockendon councillor, Kevin Wheeler has been the subject of an investigation since September.

YT understands that Ockendon councillor Kevin Wheeler had a heated exchange with a member of the public at the entrance of the council offices during a break in proceedings at a, particularly fractious meeting last September.

At the time, the leader of the Thurrock Ukip group, cllr Graham Snell stated that “Cllr Wheeler has been suspended from Council Meetings until the new year”.

“We will be carrying out an internal investigation into the matter.”

A Thurrock Council spokesperson said: “The complaint remains in progress. It would be inappropriate to comment on an ongoing investigation”.