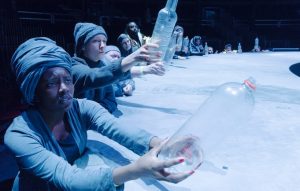 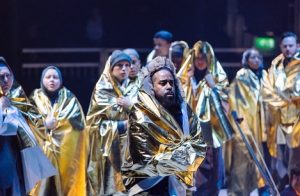 THE Return of Ulysses, the classic Monteverdi Opera, opened at the RoundHouse in Camden on Wednesday and once again showcased the dedication and talent of Thurrock Community Chorus. The chorus have enjoyed their partnership with The Royal Opera House for some time now and performed alongside professional singers and non-professional groups from both the Royal Opera House and The Roundhouse.

Rachel Lerman, one of the producers from the Royal Opera House explained that the whole project was about making the performance ‘engaging for young people’ with director, John Fulljames, concentrating less on the ancient gods and focussing on the role of the crowds played by the community choirs from Thurrock and the Roundhouse. The community singers portrayed migrants displaced from the Trojan wars and skilfully linked the timeless plot of war, love and revenge to issues we face today. The audience could resonate with an underlying theme such as refugees fleeing from Syria and terrorism in ordinary neighbourhoods making it relevant to today as well as ancient times.

Roderick Williams played Ulysses using his rich baritone voice conveying anguish but the audience were never left in doubt of his forceful character. The cast was successfully integrated to present the varied voices of Samuel Boden playing Telemachus, David Shipley as Antinous and the pretty, lighter voice of Francesca Chiejina as Melantho.  Sadly, Christine Rice, due to sing Penelope, succumbed to a throat infection and remained silent on opening night. Rice bravely walked the part competently with passion whilst Caitlin Hulcup sang convincingly from the orchestra.

Acoustically this performance was a challenge. Opera is meant to be sung directly so not obviously suited to a round former railway engine repair shed. The staging was cleverly constructed to create a memorable performance in the circular live performance space. Both the outer stage and the orchestra pit revolved, in opposite directions allowing the sound to fill the Roundhouse. Props were plain but effective. Bunches of balloons represented flocks of sheep, puffs of smoke changed the mood and a sense of travel was suggested when a tandem was ridden round the circular stage.

All the voices were beautifully supported by Christian Curnyn leading the Early Opera Company’s chamber orchestra. The baroque instruments created an authentic accompaniment.

The Return of Ulysses is showing at The RoundHouse , Camden, until January 21st