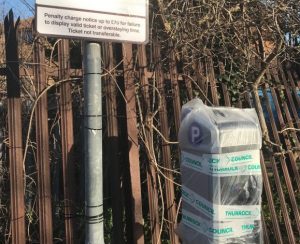 THURROCK Council has completed a thorough, service-wide review of parking which saw a limited number of pay and display machines temporarily suspended in Grays and Cromwell House, Purfleet. Historical issues, including administrative errors, have been uncovered from 2015 which have impacted on subsequent years. Action is now being taken to put this right.

Leader of the Council, Cllr Rob Gledhill said: “A number of discrepancies have been identified following the in-depth review and an action plan is in place to rectify the historical errors.

“It is unacceptable that this has happened and whilst the review took longer than it was originally anticipated, it has been done thoroughly and properly. As you can imagine, it has taken time to unpick three years’ worth of information.

“It has been my firm view, that a proper and full investigation and remedy to these issues far outweighs the need to charge for parking tickets which were frankly unreliable.

“We discovered issues relating to on and off-street parking. To address the off street issues we suspended machines in some locations in Grays and Cromwell House, Purfleet, and to rectify the on street issues we are going to be reverting to 2016/17 (from 13 February) prices until September 2018 when 2017/18 prices approved by Council will be implemented”.

“In addition to these issues, the review also made some recommendations about parking in Thurrock more generally and work to continue and expand the current cashless parking facility is being further considered.

“This comprehensive review follows inconsistent parking charges being brought to the council’s attention by the Thurrock Independent. Despite assuring the Thurrock Independent that a full response would be provided to them on conclusion of the review, a story has been published without waiting for the full and accurate facts. I hope this now makes the position clear and shows that the council has taken the matter seriously.”

Plans to temporarily update the tariff boards and pay and display machines are in motion where necessary. All signage in the car parks will be replaced by the end of February. Public Notices will be placed in the local paper in the usual way advising the public of the tariff charges.

Charges do vary across on and off street parking. This is primarily to incentivise the use of the car parks and each location is assessed based on varying levels of demand.

It is expected that this work will have taken place, and all car parking facilities will be open and available to use, by 13 February 2018. The council has not recommended any increase to the fees and charges for parking for 2018/19.