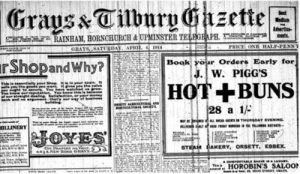 SINCE March 2014, we have been dipping into the Grays and Tilbury Gazette to look at life in the area we know now as Thurrock between 1914 and 1918.

WEST THURROCK WEDDING – A pretty wedding was solemnised at West Thurrock Church, on Christmas Day; the consenting parties being, Mr. Frederick James Dorrington, of Hornchurch, and Miss. Lissie Bird, of Dairy Cottages, West Thurrock. The Rev. J.W. Hayes officiated, and the bride, who was given away by her father, was handsomely attired in a grey silk poplin dress and wore a veil over a wreath of orange blossoms. She also carried a bouquet of lilies and chrysanthemums. Four bridesmaids were in attendance, viz., Miss. Emily Bird (sister of the bride), Miss. Ethel Dorrington (sister of the bridegroom), and the Misses Clara and Etta Lassell (cousins of the bride), all wearing white embroidery dresses. The presents were numerous and useful.

Mr. Rennie Smith of Ruskin College, on Saturday, January 6th, at the Co-operative Assembly Room, High Street, Grays, at 7p.m., will give his experiences as a Civilian Prisoner of War. Note earlier time of starting.

ARTHUR STREET GIRLS SCHOOL – The proceeds of the sale of work held at the School on December 13th, reached the sum of £37. Of this amount £31 has been sent to the Red Cross Fund, £5 to the Committee for Feeding British Prisoners in Germany, and £1 to the Home for Disabled Soldiers. (Kitchener’s).

A FAMILIAR FIGURE – The death is announced, after a long illness, of Mr. Edward White, Queen Street, Gravesend. The deceased was 50 years of age, and will be remembered as a familiar figure round Grays and Tilbury, with his large basket of shrimps, winkles, etc. having travelled the district for over 16 years.

CO-OPERATIVE CONCERT – The winter season at the Assembly Room was commenced on Saturday 6th January with a highly appreciated concert, arranged by Mr. A. Redsell who, as usual, brought a high class concert party with him. The orchestra was repeatedly encored for it’s really fine music, and the humour of Mr. Cliff Lester, and songs of Mrs. Lester, both from Southend, were thoroughly enjoyed. Mr. Ramsay was in the Chair.