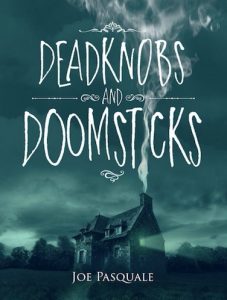 ONE of Britain’s best loved comedians returns home for a book signing. Joe Pasquale will be at Waterstones Lakeside on Saturday 27th January from 1pm, signing copies of his debut collection of horror short stories, Deadknobs And Doomsticks.

Joe who spent many years living in Grays is looking forward to returning to his roots for the event. The book comprises of 13 widely varying horror stories, many with a theme of bullying.

“Some of the stories do have biographical elements.” Joe said “Many draw from my childhood where I was bullied because of my voice. Ironically, my voice became my trademark which hopefully sends a message out there to other people being bullied that difference is not a weakness but something you can turn into a strength.”

Joe, a keen horror fan and film buff began a creative writing and advanced writing course following the start of an Open University degree on Geo Science which he is undertaking. “On the flight to Australia for I’m A Celebrity Get Me Out of Here, I picked up a book entitled Feel the Fear and Do It Anyway by Susan Jeffers and since then I have been embracing new experiences. I’ve learned to fly, parachuted, ran a marathon, learned to box. So I thought what else hadn’t I done and writing this book was an extension of the writing courses I was doing.” Joe said.

The stories, each accompanied with a water colour illustration by Joe, are as diverse as the drawings themselves. The tales are set in different decades, centuries and in the future, each with a different perspective and twist on life and the supernatural. Joe’s surreal dark humour purveys in many of the tales which can be read by young adults upwards with a caution about strong language in some of the tales.

“Tales of horror and supernatural are perfect for short stories” Joe said, “I wanted to write short stories that people could read in one sitting. I’ve loved writing the book and already have book number two planned.”

Joe has just completed a successful season at the Bristol Hippodrome playing Wishy Washy in Aladdin and is now preparing to go into a six-month tour playing Frank Spencer in the stage version of the classic hit TV series, Some Mother’s Do Ave Em.

Deadknobs And Doomsticks is published in hardback, eBook and audiobook.