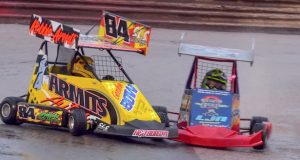 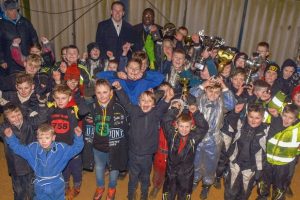 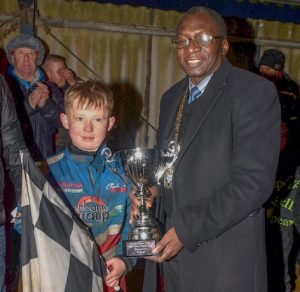 THURROCK Mayor, Tunde Ojetola, was on hand to present the trophies to the winners of the Ninja Sprint Kart World Cup at Arena Essex at the weekend. Drivers aged from 6 to 11 compete in the class and competitors from across the UK gather annually at the Thurrock Oval to compete for the sports biggest title.

Scottish racers were to the fore in the main event with 10 year old Charlie Hardie taking the flag after a dramatic race with fellow Scot Robbie Armit. It looked like Hardie had lost his chance when he slowed getting round a backmarker allowing Armit into the lead. But with barely a lap left to run, Hardie saw the slightest of gaps up the inside and with Armit trying desperately to shut the door, Hardie forced the issue and made it through in dramatic style. Hardie won six out of his seven races over the weekend, only missing out on a clean sweep when his kart lost its chain. Scottish racers were truly dominant with Armit also taking a brace of victories and Bailey Millar taking his new kart to victory too. Harry Fryatt was the English interloper taking third place in the main race.

A separate competiton was run for the novice graded Ninja Sprint competitors and Rhys Parrin came out on top of those, winning two races across the weekend.

The World Cup was only part of a huge weekend at the Arena Essex oval with hundreds of competitors taking part in the ‘Oval Racing Expo’, which featured eighty races from a variety of formulas. Almost constant rain, strong winds and even a snow blizzard failed to dampen the enthusiasm of the petrolheads.

There was drama in the Junior Hot Rod class. The weekend marked 15 year old points champion Steven Chandler’s last outing in the Juniors, before he moves onto the senior formulas, and he clearly wanted to go out on a high. However it looked like it was going to end in disaster as he was tipped into the barrier in the second heat, causing a lot of damage. At Steven’s insistance his team worked miracles to get the car straight enough for him to compete in the final. With his father Eddies advice of ‘if you blow it up or crash don’t worry’ ringing in his ears Steven drove one of the races of his life to bring the ill handling car home first from the back of the grid.

The PRI Stock Car class gave us one of the best races of the weekend with a three way battle between Vic Bilkey Jnr, Dave Palmer and Vic Bilkey Jnr raging over the final laps of the final. Experience paid off in the end with Vic Bilkey Snr bumpering both his son and Palmer into the barrier on the final lap.

Another last corner victory was scored by Chris Webb in the visiting Stansted Dirt Rod formula, Chris shunting Iain Knight out of the lead in the final yards.

Banger racing competitors got an early start with the best part of 80 booked in for Sunday, albeit there were a number of no shows when the weather took a turn for the worse. They perhaps got the worst of the snowy conditions during their heat but they still provided a good deal of action with Jason Greener winning the Expo Campionship.

Competitors will be glad of some drying out time now before the first of the Rolling Thunder Show presentations takes place on 17th March with the first PRI Banger event taking place the following day on 18th March.