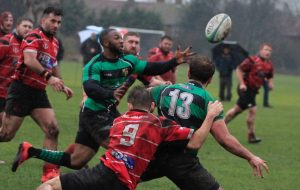 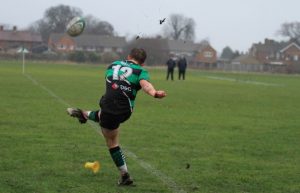 WITH several injuries and availability issues Thames went into the quarter finals of the cup with players taking on unfamiliar positions but confident in their team ability.

The weather was foul, cold and wet and would play a part in the handling of the ball during the game for both sides.

Stanford had the lion share of the possession in the first half but it was Thames that had the better defensive line and made the most of their chances. Thames first score came from an awarded penalty which Rhys Dell made look easy when asked to kick for the posts by Captain Liam Smith. Thames next score came by way of a try. Powerful running by several forwards building phase on phase was finished by Jack Egar when he smashed his way through the Stanford defence.

Before half time Thames extended their lead with another try followed by the conversion. Thames hadn’t been showing their normal slick handling but just before half time it came together, with the forwards bringing the ball up the centre of the pitch it was the backs that pushed the ball wide onto Edgar Juska playing on the wing. Juska stepped through the Stanford defence and touched down over the try line. Dell added the extra two points.

Thames started slowly in the second half conceding two tries before 9 minutes of play but Stanford could only convert one. Both tries came from strong forwards play close to the Thames line after some very positive defence but Stanford’s constant pressure finally broke free. The rest of the second half saw both sides trading attack and defence with neither being able to break the deadlock. As the time ticked down Thames were defending only metres off their try line. Awarded a scrum, Thames scrum half Matthew Hook cleared the ball back to Dell who was standing behind his own try line. With still too much time to kick straight to touch Dell sprinted through the Stanford line and down the wing, making good ground he was finally run into touch and the final whistle was blown.

With both teams having scored twice and converted once it was the early penalty kick that made sure Thames took the win 15 -12. Thames Man of the Match was awarded to Rhys Dell as he was involved in everything good that Thames did. Dell’s work rate was second to none and during the game he moved from inside centre to fly half showing no problems with the reshuffle.