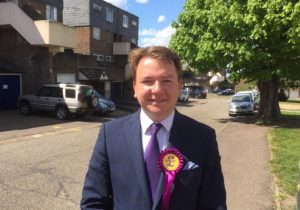 THURROCK councillor, Tim Aker has quit his post as the Local Government spokesperson for UKIP.

Cllr Aker said: “Today I am resigning as UKIP’s Local Government Spokesman. I cannot continue to serve under Henry Bolton. I hope he does the right thing and resigns before the EGM, so the Party can move forward with a new leader.

He is the fourth senior Ukip member to resign.

A vote of no confidence in the leader Henry Bolton was issued by the National Executive Committee of UKIP after an on-going controversy regarding his (former) girlfriend, Jo Marney.