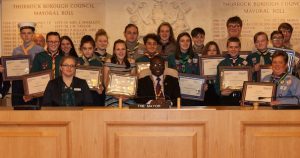 THURROCK Scouts recently held their annual celebration of their 2017 Jack Petchey Award winners at the Council Chambers in Grays.

22 of the 27 winners from last year were able to attend and they each received a framed certificate, gold medallion and lapel badge from the Jack Petchey Foundation. Each winner has previously been awarded £250 to be spent within their group or unit on an activity of their choice.

3 adult volunteer winners were also present and received the same framed certificate and medallion to recognise their dedication to Scouting and the young people involved. Each can also apply for a £750 grant from the Foundation for an activity of their choice.

The Scouts were joined by the Mayor Tunde Ojetola and Katie Purcell from the Jack Petchey Foundation who helped with the presentation, and by District Vice-President David Butcher and his wife Heather.

After the presentations, each winner had the chance to share their favourite experience from Scouting so far. These included expeditions to Australia and Switzerland, various national camps and walking the North Downs Way.

Thanks go to the Mayor and Mayor’s Secretary for allowing the continuing use of the Chambers every year, and to the District’s Jack Petchey committee for organising the event and ensuring the award is well managed within Thurrock Scouts.

For more information on the Jack Petchey Foundation, visit www.jackpetcheyfoundation.org.uk.