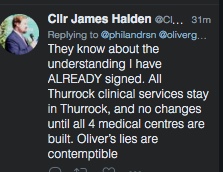 THE THURROCK councillor in charge of health, has charged the leader of Thurrock Labour with telling “outright lies” over plans surrounding changes to health care in Thurrock.

Tory councillor, James Halden made the comment on Twitter as political parties clash over the future and future timing of any changes to Orsett Hospital and the opening of health hubs across Thurrock.

He said on Twitter: “They know about the understanding I have signed. All Thurrock clinical services stay in Thurrock and no changes until all four medical centres are built.

The tweet was addressed to leader of the Thurrock Labour group, cllr Oliver Gerrish.

We contacted cllr Halden with the hope that he would be able to expand upon his comments. He has not replied.

Cllr Gerrish has indicated that he did not wish to be drawn into this particular debate.