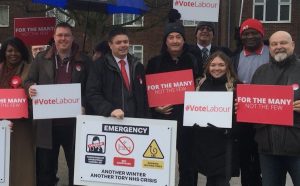 EARLIER this month, Thurrock Labour Group Leader, Oliver Gerrish, raised concerns about the visibility of the consultation on the closure of Orsett Hospital. Now further issues with the consultation have emerged at the January meeting of the Thurrock Council Health Committee.

The committee heard sustained criticism of the consultation from HealthWatch Thurrock, the independent Health & Social Care Services champion for the people of Thurrock.

Feedback from residents and local groups led Kim James, the HealthWatch Thurrock representative to remark “The concerns that have been raised with us are that they feel the consultation document fails the people of Thurrock. It is very hard for people to access it… up until 6 weeks in the only option was to go online to complete it.”

“When you go out with this document, people do not realise that in here is anything in here to do with Orsett Hospital.

“You have to go 48 pages into the 54 page document to find the Orsett part of it!

“Only two thousand [hard copies] were printed for the whole STP area of 1.4 million people and we got 97 of them in Thurrock.” She summarised by saying “It is not a fair consultation.”

She later added, “Some things are being moved to rectify this but we’re seven weeks in …
We do have concerns that there is not fair access to this document”.

It appears that concern over the consultation was beginning to spread across the political spectrum, with Councillor Joy Redsell (Conservative) remarking, “We’ve got to realise that there’s a group of people out there that we are just brushing over, that they don’t matter – because I tell you what, that’s how they feel out there”. Referring to the proposed consultation meetings, she complained “None of my residents, I can assure you, know about these two meetings in the civic hall”.

Speaking after the meeting, the Thurrock Labour Group Health Spokesperson, Councillor Victoria Holloway said, “I was absolutely astounded to hear about the shortcomings in this consultation. A decision this big should allow all our residents to take part. I’m concerned that this message is still not reaching everyone.

“Thurrock Labour is calling on all residents, whatever their views, to make sure that they respond to the consultation. Because of our concerns about the lack of detail on the future provision of services, the Labour Group are opposing the closure of Orsett Hospital.”

You can sign the Labour Party’s petition to save Orsett Hospital here: http://www.thurrocklabour.co.uk/save_orsett_hospital

The consultation can be found here: http://www.nhsmidandsouthessex.co.uk/
It will close to responses on 9 March 2018.