Having denied the T-Birds promotion in their first playoff back in 2009, there is always a little spice in the fixture.

Cheltenham, who inexplicably slipped up against Henley last week were desperate to put things right and win Championship South for the first time in their history.

Having put in a couple of sub par performances this season, the T-Birds were determined to get back on track for this game, and so it proved. Ts were superb with the ball and magnificent without it.

Only 5 minutes in, Ts were held up over the line and in the second scrum of the game Ts went for the pushover try, Dyche dropping on the ball at the back as Cheltenham were shunted backwards.

Cheltenham then had a really good 10 minutes of pressure, but T’s offensive defence continually drove them backwards.

Despite Thurrock losing 2 props, their replacements continued the scrum dominance. Winning the ball back, Ts camped in the Cheltenham 22 and continual pressure eventually allowed Harvey to dance through a gap and touch down under the posts.

Both teams had opportunities in the final 10 of the half, but the score remained 14-0.

Despite a flurry of pressure by Cheltenham after the restart, T-Birds were quickly back in the Cheltenham 22 applying pressure. A yellow card to Cheltenham’s 3, Kingston, resulted in uncontested scrums, but avoiding the inevitable pushover attempt was to no avail, as Foy smashed over the line for the 3rd try.

Now with a mismatch in numbers, Ts cranked up the pressure and gaps appeared as every contact took 2 or 3 tacklers to bring a T-Bird to ground. Finally Tyler put the game to bed with a trademark crash and run between the posts.

With both sides visibly tiring, Ts defended resolutely for 10 minutes as Cheltenham fought for a consolation try. Finally turning the ball over, Ts attacked in search of the 5th try and vital bonus point.

Again and again small errors cost Ts the score they so desperately needed, but with last play called, Ts packed down for a final push over attempt. Moving forward smartly at first, the attempt stalled, but Dyche picked up from the base and crashed over for her second of the day and the bonus point.

So with a final score of 31-0, T-Birds are still second to Cheltenham in Championship South, but with a game in hand, their destiny is in their own hands. 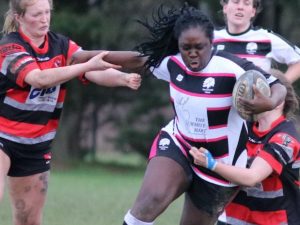 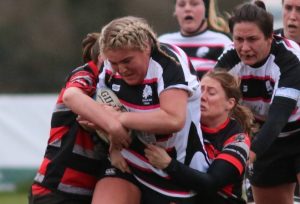 Next game is Sunday 4th Feb when the T-Birds are away at Henley 1pm KO.

No matter how big or small, there is a place for you in a Rugby Team. Many are beginners, playing in their first Season, so don’t be put off if you are new to the game.
We can promise you great training and a great social life. Just turn up on a Wednesday evening at 7.30.