Robbery at Co-Op in Tilbury 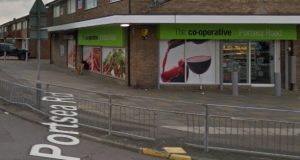 ESSEX Police is appealing for information to find two men behind a robbery at a Tilbury shop.

The suspects entered The Co-Operative in Portsea Road, at 9.35pm on Tuesday, January 30. One was armed with a hammer and demanded money from the two shop workers at the tills. He was handed a three figure sum of cash.

The other man went behind the front counter and stole cigarettes worth a three figure sum.

The first man was described as white, about 6ft tall and of large build. He wore matching grey tracksuit top and bottoms, white trainers and had his head and face covered with a tea towel.

His accomplice was described as white, about 5ft 4ins tall to 5ft 5ins tall, and of stocky build. His face was covered with a hood and tea towel, he wore black clothes and was carrying two plastic bags that he used to put the cigarettes in.

A number of customers were in the shop at the time and officers would like to speak to them and to anyone who saw two men matching the descriptions given in the area at the time of the incident.