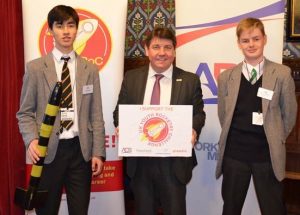 STEPHEN Metcalfe, MP for South Basildon & East Thurrock, is encouraging local secondary schools to ‘reach for the sky’ with a national rocketry competition to inspire the next generation of rocket scientists.

This week in Parliament Stephen Metcalfe joined the UK school finalists from 2017, to find out how schools in Basildon and Stanford can become this year’s champions.

UKRoC involves the design, build and launch of a model rocket with the aim of ensuring the passenger – two raw eggs – remains intact throughout the launch and landing. The rocket must reach 800 feet with specific target flight duration of 41-43 seconds.

The national final champions win an all-expenses-paid trip to the Farnborough International Airshow in July to represent the UK in a fly off against teams from the USA, Japan and France.

Stephen said: “As we saw on Tuesday with the launch of the largest ever rocket into space from the Kennedy Space Centre in Florida, building rockets is exciting. What better way to inspire the next generation of rocket engineers.”