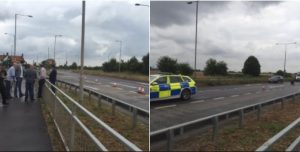 FOLLOWING disruption on some of Essex’s major routes last weekend due to pony and trap racing, we are asking the public to report any similar activity taking place this weekend.

There was significant disruption on the A127 last Saturday (February 3) due to pony and trap racing on the Southend-bound stretch between the M25 junction and Dunton.

“Any activity which puts people using the county’s roads at danger of being involved in a collision is unacceptable and we will act to stop it.

“The safety of the public is our number one priority and we’ll be monitoring the county’s roads but I need anyone who sees this activity taking place to contact us.”

Last Saturday, we were called to reports of a large group of vehicles, horse boxes and pedestrians in a lane of the A127 between Codham Hall Lane, Great Warley and The Halfway House pub.

Our officers attended to ensure public safety and that the road was not obstructed, seizing three vehicles and issuing a warning to another driver under Section 59 of the Police Reform Act 2002.

If you have any information about any activity relating to pony and trap racing anywhere in the county, or any information or dash cam footage of the incident from last week, please call us on 101 or Crimestoppers anonymously on 0800 555 111.