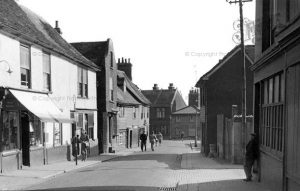 WE began the year with an illustrated talk on Essex Curiosities by our Chairman, Susan Yates, with sad and hilarious stories. In April 1884 the most devastating earthquake in 400 years took place at Colchester, most of the buildings in Wivenhoe and Abberton being demolished. In Abbess Roding John Thurloe, son of the rector, was a spymaster for Oliver Cromwell.

There is a tradition that the Beauchamp Roding puddingstone was moved three times from the top of the hill to the bottom each night, where the church was eventually built. A plaque at Birdbrook church shows Martha Blewitt who had 9 husbands and Robert Hogan who had 7 wives – whew!

Vicar’s son John Gauden was born at Mayland in 1605, won a place at Cambridge when he was 16 and was made Bishop of Exeter in 1660. About 1872 the Rev Arthur Pertwee of Brightlingsea provided a flashing light on the church tower to aid mariners. Canewdon was the centre of witchcraft, with a witch on the village sign. There are still witch dolls in windows of some houses. Susan was cursed by a villager with the sign of a white witch on her bicycle, then promptly fell down the step! The church at East Horndon is now poorly maintained and the grounds overgrown. A legend says Sir James Tyrell was asked to kill a ‘dragon’ there which had escaped from a Thames ship – he slayed it but died from his exertions. Another legend is that Anne Boleyn’s head or heart is buried there. At Galleywood two sisters inherited money – one built the church and the other a racecourse round it in 1759, the railings still in evidence.

In September 1916 two airships came down at Great Burstead. One was shot down, killing all on board, the other landing intact at Little Wigborough. The same night a baby girl was born and named Zeppelina. At Great Dunmow Lionel Lukin invented an unsinkable lifeboat in 1794. Another story is of a Miss Lee, at Great Waltham. After being disappointed in marriage she awoke one night and saw an old lady in her room, supposedly her late mother who said they would be re-united at midday. Sadly Miss Lee died that night, aged only 18. At Hatfield Peverel Maude, daughter of a Saxon nobleman said to be son of Ethelred the Unready, was credited with founding the priory and said to be buried in the church walls.

At Hutton there is a headstone by the side of the road, commemorating the death of PC Robert Bamborough who was killed by man he was escorting to prison. ‘Brizes’ mansion at Kelvedon Hatch was built in 1720; in 1882 the tenant prosecuted Mr Randall, a poacher. Mr Randall begrudged this and in 1906 built a row of cottages in full view of the manor, causing a blot on the otherwise open landscape – to this day they are known as IOU cottages.

The battle of Maldon against the Vikings took place in 991, ending in Anglo-Saxon defeat and a payment in silver, known as ‘Danegeld’. At the United Reform Church there is a blue bullseye plaque erected as a result of the popularity of the Rev. Joseph Billio. All Saints Church has a unique triangular steeple, with a window erected in memory of a descendant of George Washington. Several boat owners at Paglesham were smugglers, one of whom was William Blyth. He was also a grocer and churchwarden and often wrapped groceries in pages torn from the parish registers. A Sgt Adam Eves was murdered at Purleigh in 1893; his body had been horribly mutilated and two brothers were accused of the crime. One pleaded guilty and was hanged, the other pleaded not-guilty and was sentenced to life imprisonment.

A large cemetery at Bicknacre is near the old leprosy hospital of St Giles. It is divided in two – one part for the lepers and the other for the nuns who tended them. Kate Luard was buried at Wickham Bishop in 1962. She was born in Aveley in 1872, trained as a nurse and sent to South Africa during the Boer War. In 1914 she joined the Queens Alexander Nursing Service and was sent to the front and was award the Royal Red Cross.

This was a very detailed and often humerous talk with a wealth of facts about Essex. Our next meeting is at 8.00pm at the Adult Community College, Richmond Road, Grays on Friday 23 February when our talk will be Creekmouth: Barking’s Lost Village, by Linda Rhodes. Visitors are welcome.