Rugby: T-Birds storm through hail and rain to beat Bath 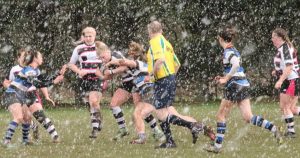 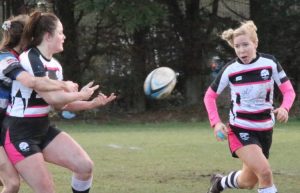 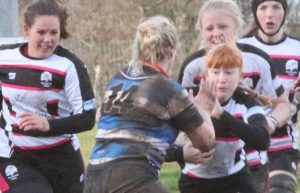 THE hail storm during the warm up set the tone for this vitally important game for the T-Birds. A win would see them unwind the stagger of the game in hand and go top of Championship South.

A biting North Easterly coupled with intense showers of rain, hail and snow, meant that too many balls went to ground instead of hand, but this meant an ample supply of ball to Thurrock’s dominant scrum.

With a few regular faces missing through injury and illness, the change in laws allowed 17 year old Sarah Jane Earwicker to make her full debut in the back row..

Bath failed to cope with the power of T’s forwards and the pace of their backs. Pugh, Hepper, Dyche, Baker and French punched holes, while the dancing feet of India Harvey unpicked the midfield on a regular basis.

A break down the right by the backs resulted in Pugh arriving at pace to collect the popped up ball from the ruck and the first try was on the board in only 7 minutes.

On 20 minutes, the forwards got the ball to the Bath 22, Tyler ghosted through the defence and Harvey in support collected the offload to score the second.

From the restart, T’s turned over the ball on their own 22, Baker carried up the middle for 40 meters and then Tso went wide through Tyler and then Smith, who still with work to do, outpaced the full back to effectively end the contest.

Bath competed gamely, but Harvey collected her second before half time and then it was all about the bonus point which came courtesy of French early in the second half.

Lawther and Parsad, kept the scoreboard ticking over as the score built.

With last play called, Cook ( perhaps with one ear on some recent criticism of her kicking accuracy) performed a perfect cross kick which dropped into the hands of 17 year old Whymark out wide on the right, who only had to fall over the line for her first T-Bird score and the final one of the game.

44-0 with the 5 try bonus point puts Thurrock T-Birds 2 points clear at the top of Championship One South with 3 games to go.