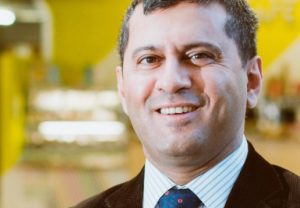 ‘Belong, Believe, Achieve’ is a series of profiles showcasing inspiring students and staff at the University of East London. Each week, we bring you a new story about someone in our amazing community reports www.uel.ac.uk

This week we showcase Gaurav and his robots.

A computer scientist at the University of East London (UEL) who won a £96,000 grant to bring computer coding and robotics to schools in Thurrock, Essex says his project is off to a flying start.

Mr Gaurav Malik, a computing lecturer at UEL, won the grant from Make Happen, a group of educational providers, local employers, and non-profits working together to increase the proportion of people from disadvantaged and underrepresented groups going to university.

He says, “In February we launched a pilot workshop with a group of 13-16 year olds, which helped us fine tune the workshops which we’ll roll out more widely, soon.”

Gaurav also revealed that in late March he and his team of UEL student volunteers will be piloting a workshop for parents, to bring coding and robotic skills to a slightly older generation, and help them to support their own children.

“We’ve found some great robots to enrich the workshops and make them really interesting,” says Gaurav.

“There’s a few we’ll be using, like the popular EDBOT and actionbot, which are ideal for educational settings, as they let the students see how coding results in action.

“We want to use Makey Makey as well, as it gives people a way to learn computing by linking it to making things, so it brings out a parent’s creative side.”

Makey Makey is a small circuit board that links computers to people and objects, and lets them interact with the computer responding to the physical movements of a person or object.

It was invented by two students at the world renowned Massachusetts Institute of Technology in the US. It is now a business and community outreach project.

Gaurav’s project hopes to reach a core group of 175 students through 15 interactive coding club sessions in schools and colleges across Thurrock, plus a wider group of 3,000 students, teachers and parents through assemblies and masterclasses.

A report on computer education by the Royal Society found that 54 per cent of secondary schools did not offer GCSE computer science in 2015-16.

UEL is a member of the 11-19 Thurrock Strategy Group, which is co-designing and co-delivering the programme with the University. The-day-to-day running of the project will be looked after by UEL’s Education and Community Partnerships Team and a group of UEL student mentors.