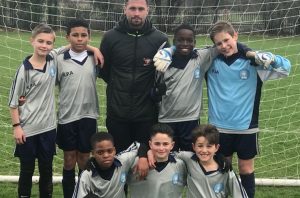 These schools will now head to the Thurrock regional qualifiers in the next leg of the tournament which is being held on:

Both tournaments will be held at West Ham United Foundation (60a Albatross Close, Off Woolwich Manor Way, Beckton, London, E6 5NX) from 12-4pm.

Ormiston Park Academy hosted these qualifiers in its capacity as a West Ham United Foundation Hub School, which provides a set location for local children aged from 5-12 to attend programmes such as futsal and football development sessions, as well as half-term “Soccer Schools” throughout the year.

As part of the Foundation Hub School model, OPA and West Ham will be launching a Post-16 Football Development Programme in September 2018. The Programme will offer 16-19-year olds the opportunity to gain academic qualifications, such as BTECs and A-Levels, with the added bonus of regularly scheduled training sessions twice a week, and the ability to compete in fixtures on a weekly basis, within a local collage league.

Huw Derrick, Principal of Ormiston Park Academy, said: “It was a fantastic day which was only made possible by the amazing participants and staff from all of the schools involved.

“We wish all the finalists from across the week’s events the best of luck in the future of the tournament.”