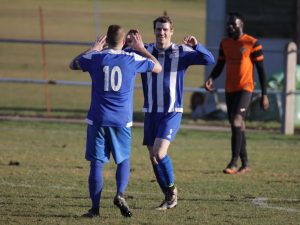 Roddy Lemba netted again for the hosts as they came from behind to take a share of the spoils against Southend Manor at Cricklefield. Manor took the lead through Alfie Lindfield, only to see Lemba net a leveller a minute before the break.  With neither team able to find a second half winner the match ended all-square.

A brilliant free kick from Nick Barrett settled a tight contest at the Old Spotted Dog as Takeley grabbed 5th spot back off the Tons after defeating them here. The visitors started stronger but as the game went on the hosts managed to get to grips with the visitors, however Barett’s moment of brilliance saw the visitors take the points.

The hosts bounced out of the bottom four and up to 16th after making it back to back wins in the league following their success over Stansted at Barrows Farm. Both their goals came in the final ten minutes of the first half, as first Ado Odukoya put them ahead ten minutes before the break and then doubling their lead five minutes later through Dan Crowe. Stansted applied plenty of second half pressure, however they could not breach a resolute Enfield back line and so it meant another defeat for the Airportmen, their second on the bounce, as they stay in 13th.

In the big match of the day at the top of the table, Rovers and Redbridge could not be separated at Burroughs Park. The hosts dominated the early proceedings but saw The Motormen go ahead completely against the run of play when Moses netted from the edge of the box. But the hosts responded immediately when Nathan Dewberry headed home. The visitors were then awarded a spot kick which Moses blasted over, meaning the sides went in level at the break. Wakering missed two golden opportunities to go in front early in the second period; however Redbridge looked most likely to win but were not able to score any further goals themselves.  The draw was a fair result and means Redbridge remain three clear at the top, ahead of Rovers who climbed into second place on goal difference.

Sports netted a much needed win after they came from a goal down early on to take the points against Tower Hamlets at Lower Road. The visitors led after just six minutes when Elias Tackie converted a Luke With cross.  The hosts levelled on the half hour mark when the returning Luke Hornsley blasted past Pellin. Hamlets missed chances to retake the lead and paid the price when in the 77th minute they fell behind as With nodded past his own keeper Pellin. In the end that own goal ended up sealing a much needed three points for Hullbridge.

Aaron Thomas netted for the hosts but it was a tough battle against Ilford at Crofters as the game ended up a draw. Tony Cookey notched the equaliser five minutes before the break.  Both teams had chances to score more however the game ended with both teams sharing the spoils; meaning the teams remain 11th and 7th respectively.

Lodge stunned Forest in the Walthamstow derby at Kitchener Road, closing the gap between them and fifth bottom Forest to just four points. The hosts for the day half volleyed home with their first attack before sloppy marking saw Lodge double their lead. And with Forest all at sea the home side netted another before the break to lead by three goals going into the half time break. The visitors pulled one back when Topal put Christian Owusu in and he finished well, before it was 3-2 when Owusu netted from the spot after a handball from Foxe. However Lodge then won a penalty of their own after Shepherd bundled over Francis, and Stanley netted, completing his hat-trick and sealing the points for the home side. Brian Simpson was the other Wadham scorer in this East End tussle.