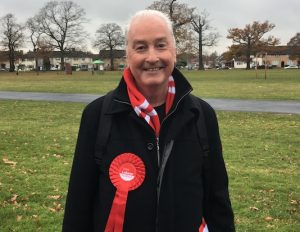 THE Labour Party has announced lifelong Ockendon resident and former bus driver Leslie Strange as their candidate for the Ockendon by-election on Thursday 22 March.
Speaking about why he is standing Les said: “I’m Ockendon born and bred, I was educated at local schools and my children and grandchildren live here. This is my community and I am proud to have lived here all my life. I still live in the house I grew up in and have seen many changes of over the years – not all for the better.”

“I’m standing in this election because I’m fed up of watching Ockendon being let down. We have had enough of out-of-touch Tories and so called ‘Independents’ who promise us the earth but achieve nothing for Ockendon residents. I share the problems and frustrations we currently face every day living in Ockendon.”

“The Tory cuts have closed our local police station and resulted in more crime and anti-social behaviour in Ockendon leaving many afraid to go out after dark. As your councillor, I will fight for the resources we need to police the area effectively so people can feel safe again.”

“While the so called ‘Independents’ have sat on their hands, Tory cuts have left our parks neglected and filthy. Our community deserves better and if I am elected I will work day in and day out to clean up our streets and get fly-tipping under control.”

“Above all I am standing to defend our local NHS. Under the Tories waiting times have soared, hundreds of operations have been cancelled and staff shortages at Basildon Hospital are causing unplanned closures of key services.

“Now the Tories are trying to push Thurrock’s NHS over the brink by closing Orsett Hospital. As a local resident I know how vital Orsett Hospital is to the people of Ockendon and I am standing in this by-election to send the Tories a clear message – keep your hands off our hospital!”

Thurrock Labour is the only local party campaigning to keep Orsett Hospital open.