TWO women have been handed suspended sentences for keeping dogs and puppies in dire conditions at a puppy farm in Essex.

Teresa Wade (DoB: 4/5/59) of Ship Lane, Aveley, in Essex, and Victoria Montgomery (DoB: 5/12/61) of Melford Avenue, Barking, in London, both pleaded guilty at Southend Magistrates’ Court on Tuesday (20 February) part-way through a trial for a string of animal welfare offences. 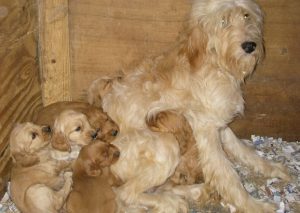 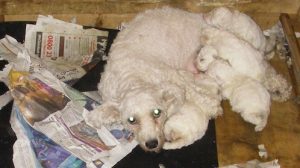 The duo admitted keeping dogs and puppies in dirty, unsuitable conditions following an investigation into puppy farming by the RSPCA.

Wade pleaded guilty to three animal welfare offences and was disqualified from keeping dogs for 10 years and was given a five-month prison term, suspended for 11 months. She was also ordered to pay £500 in costs and a £115 victim surcharge.

Montgomery admitted one animal welfare offence and was given a three-month jail term, suspended for 11 months, and was also ordered to pay £500 in costs and a £115 victim surcharge.

The RSPCA launched a large-scale investigation – called Operation Excel – in the breeding and selling of puppies in Essex in 2014 after receiving a string of calls from members of the public who had bought puppies that had become extremely sick or, in some cases, even died.

When the RSPCA and police executed a warrant at a site in Essex – and two other residential addresses, one in Essex and one in London – officers found 76 dogs and puppies, including poodles, cocker spaniels and some of the popular designer crossbreed types such as cavachons, cockerpoos and golden doodles.

The dogs were seized and placed into the RSPCA’s care and a number of pregnant bitches went on to have 27 puppies in the charity’s centres. Of the 103 dogs in total, four sadly died, but courts ordered for the remaining 99 dogs to be rehomed ahead of the court hearing.

RSPCA inspector Carroll Lamport, who led the investigation, said: “After a number of calls from people who had bought puppies that had fallen ill we became suspicious of a gang who appeared to be selling a large number of puppies.

“The dogs were being bred on an industrial scale at a site in Aveley and were kept in disgusting conditions in makeshift kennels and pens in outbuildings.

“When it was time to sell the puppies – for hundreds of pounds each – they would be moved to two houses being used as front addresses to sell the puppies from. The staged houses to gave the impression that the dogs were much-loved family pets. The reality was far from that.

“These dogs were kept in dark, damp pens covered in filth. They were in terrible conditions, riddled with worms and fleas, with matted, dirty coats. Many of them were extremely poorly with campylobacter and giardia – both serious and potentially deadly parasitic illnesses.”

RSPCA investigations determined that while many of the dogs were being bred on-site, a number of puppies were also being imported from abroad.

“These dogs were being kept in horrendous conditions, it must have been hell for them,” inspector Lamport added.

“Sadly, we lost a few of the pups but, thanks to the wonderful dedication of our animal centre staff and fosterers, the rest have all flourished and are now happy, healthy dogs in loving homes.

“Many of them still carry the scars – both mental and physical – from this part of their life, though. Some have ongoing health problems caused by the conditions they were kept in while others have developed behavioural issues because they were not properly socialised as pups.”

“It’s clear that this gang didn’t have a care in the world for the welfare of these dogs. All they saw when they looked into their dark, sad eyes was a way to make thousands and thousands of pounds.”

One of those puppies rescued from this awful life was Khaleesi, now three. Her heavily pregnant mother, Mia, was rescued from the puppy farm before giving birth to seven pups.

Khaleesi, or Kizzy as she’s known at home, now lives with Jemma and Rob Notley in Horsham, West Sussex.

“She was really timid as a puppy,” Jemma said. “She wouldn’t go outside but would sit on the doorstep and tremble. She was frightened of everything: leaves, the wind, even her own shadow.

“In her first year she was allergic to everything. She was on antibiotics and steroids a lot.

“She is still very nervous in crowded places and is frightened of loud noises. She also still struggles with allergies, we have to be really careful with what she eats and in summer it gets much worse.

“When I think about what life had in store for her before her mother was rescued by the RSPCA it brings tears to my eyes. Thinking of her hiding in the corner of a cold, cramped pen is heartbreaking.”

The RSPCA encourages prospective puppy buyers to use its online Puppy Contract to help ensure they find a responsible breeder and buy a happy and healthy puppy. The charity also has lots of advice for buyers on its website: www.rspca.org.uk/adviceandwelfare/pets/dogs/puppy/sales.

Anyone who is concerned about a puppy breeder or seller should report their concerns to the RSPCA by calling the charity’s 24-hour cruelty hotline on 0300 1234 999 and also report to their local Trading Standards.