THE CONSERVATIVE leader of Thurrock Council is set to make a formal complaint to Essex Police over their alleged “lack of action” in dealing with a traveller encampment in South Ockendon.

This centres around an unlawful traveller encampment in The Culver Centre off Daiglen Drive in South Ockendon on Monday night.

Thurrock Conservative Leader Rob Gledhill said: “I made council officers aware of travellers at the Culver Centre on Monday evening, who then notified the police. 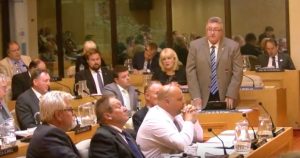 “First thing in the morning, council officers were on the scene not only assessing the situation but proactively stopping criminality occurring and advising the travellers they needed to leave the site.

“I understand the Police Gypsy and Travellers Unit were called on more than one occasion to get assistance and whilst they couldn’t assist themselves, they did try to get support from other Police colleagues.

“Senior Police Officers were also contacted asking for assistance but none was provided. It was only the high professionalism and determination of the council officers on site, who used different powers, that led to the sudden end of this illegal activity. The travellers were formerly warned using the Community Protection Process and they were moved on and have been warned not to return to Thurrock.”

He added: The lack of direction and action by the senior police management has yet again let Thurrock residents down, regrettable the third time in as many weeks.

“I will be making a formal complaint in relation to this and the other incidents. It is not acceptable that Essex Police continue to pay lip service to this very serious issue.

“I again thank the Council officers for their actions and hope it will send the message to those who think Thurrock is a soft touch for this type of criminality, that we will use all and any type of action to stop our land being used illegally.”