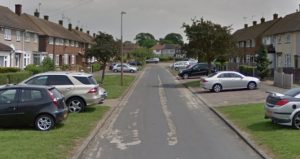 TWO men are due to appear at court today (March 14) charged in connection with an attempted aggravated burglary.

George Wilderspin, 18, and Jay Hursham, 20, both of no fixed address, will appear before magistrates in Basildon this morning.

Both will face charges of attempted aggravated burglary in connection with an incident in Ernan Close, South Ockendon on March 12, 2018 in which the front door to a property was smashed and an unknown liquid squirted inside.

Wilderspin has also been charged with assaulting a police officer in the execution of his duty while Hursham also faces a charge of possession of class A drugs.

One Response to "South Ockendon: Two charged over burglary where “unknown liquid” used"