TWENTY primary schools from across Thurrock recently participated in the fifth annual Mathletics competition, hosted by the Gateway Academy and sponsored by the Rotary Club of Grays Thurrock. 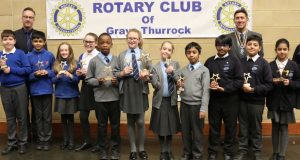 Pupils concentrated for 90 minutes on maths questions and found this an exciting challenge which required team-work, problem solving and lots of concentration.
Year 9 helpers from the Gateway Academy worked extremely hard collecting and marking answer sheets whilst the participants excitedly watched their scores being displayed on a big screen throughout the competition.

Congratulations go to the GLC’s very own Gateway Primary Free School pupils who won the competition with Tudor Court Primary coming second this year, very closely followed by Woodside Academy in third place who were only ten points behind. Deputy Head of the Gateway Primary Free School, Miss Amanda Arnold, said “Our team comprised of Kaidence, Ellie, Mohammed and Finley who have been working very hard for their upcoming end of KS2 assessments and used these skills during the competition. We are very proud of all four pupils. It is a well-deserved success!”

President of the Rotary Club of Grays Thurrock, Mr Steve Payne, commented “It is an absolute pleasure to be involved with schools in this way. The pupils seemed to really enjoy the competition and we are delighted to sponsor this event for the fifth year running.”

Mr Kevin Sadler, CEO of the GLC, added “It was an absolute joy to see so many mathematical young minds all in one place. I would like to thank the Rotary Club of Grays Thurrock for sponsoring the event and I look forward to next year!”