Arena Essex: Blizzard of bangers in first event of the season

Jason ‘Boxer Jack’ Jackson won both divisions of the snow hit National Banger Shakedown event at Arena Essex on Sunday, dominating the day as he has done on so many occasions in the past. 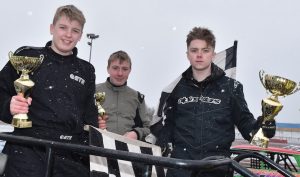 There was a very good entry of Micro National Bangers for what doubled as the first round of their 2018 World Series. Their first heat of the day was possibly the liveliest with a series of hits on turns one and two seeing Ricky Hutton destroy Aidan Christie, amongst other action.

Brad Turner spotted a lurking Joey Palmer and bravely squared him up for a head on, in the full knowledge that Palmers team mates were unlikely to let it rest. Sure enough Jackson dished out a massive hit which was followed up by a drivers side hit from Scott Cornish and then Jackson travelled the wrong way down the straight to hit Turner again, Dom Hall landing the final blow. Luckily Turner was unhurt after the rather excessive attention but the race was brought to an early end to check on him, Bradley Lee starting the defence of his World Series title with the race win.

Another race stoppage affected heat two with Reece Fields rolling after a massive crash from Dean Goodearl on the pit bend. Michael Outen won the restarted race, passing Karl Douglas on his way.

The Micro National Shakedown Banger final always looked like a ‘Boxer Jack’ benefit, his pole position start soon turned into a commanding lead. A big turn one push had already accounted for Phil Bassett and Jay Lingham before their cars were used as target practice for a big pack of cars with Ricky Hutton pushing from the back! Outen was stopped on the pit bend by Alfie Crittenden, Hutton following up with another hit. Dean Goodearl and Alfie Lee were the podium finishers behind the dominant Jackson.

In the Destruction Derby Bradley took a starring role, landing a couple of big hits before the weight of numbers against him began to tell. Despite massive hits from both Jackson and Hutton, he kept going until Scott Cornish finally silenced the plucky teenager. Hutton attacked Cornish but finished as the meat in a Cornish/Jackson sandwich, Jackson completing his dominant display with the DD win.

The Unlimited Banger class featured a very disappointing entry but the first race of the day was a cracker with Dean Goodearl trying to hook out Jackson on the final lap along the back straight. With both of them delayed, Sonny Sherwood and Alfie Lee both managed to sneak by on the run to the flag with all four cars covered by a hairs breadth.

There was no denying Jackson from that point on, he dominated the rest of the meeting in the class.

The Stock Cars saw a debut race win for Ministox graduate Aaron Totham in the first heat awhilst Vic Bilkey Jnr dominated the second heat. The snow was at its worse in the final, conditions which seemed to suit Dave Palmer, who dominated, ahead of Nathan Roberts and Bilkey Snr.

A small entry of Ministox provided the race of the day in their first heat with five cars battling for the lead. Danny Elbourn won the race from Charlie Sime, whilst Bradley Eltham was spat out of the pack into a complete spin, but fought his way back only to be denied a podium place by Abbie McGuiness on the final corner.

A completely dry track for heat two allowed Edward Selby to take his first Arena Essex victory ahead of Sime and McGuiness. His hopes for a similarly dry final were dashed with heavy snowfall by this time making it treacherous. Elbourn again was victorious ahead of Josh King and Sime.

The next action at Arena Essex is over the Easter Bank Holiday with the first ever appearance of the Back to Basics Banger class on Easter Sunday 1st April expected to bring a good entry of cars to the venue and hopefully a number of new drivers too. The Stock Rods and Lightning Rods are in support.

Meanwhile on Bank Holiday Monday there is an extra special treat in store with a Caravan Race finishing a full day of PRI Banger racing. The 2L Stock Cars and Ministox make it a full contact day. Start time for both events is 1pm.