Across The Border: 18,000 new homes approved 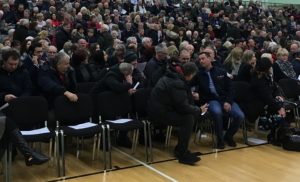 HUNDREDS of people crammed into Basildon’s Sporting Village to have a say on the borough’s housing plan.

After more than seven hours of debate, councillors finally signed off on the plan in the early hours.

The future will include more than 9,000 homes in Basildon, Laindon, Pitsea and Noak Bridge; more than 3,000 in Billericay and more than 3,500 in Wickford.

Apart from the number of homes, the hottest topics of the night were traveller sites being situated in new housing developments and lack of infrastructure to accommodate the overall plan.

Conservative councillor Phil Turner said not enough planning had gone into road and rail improvement, especially in Billericay and Wickford.

“You’ve dumped on Billericay and you know you have,” he said. “You will carry on dumping. You’ve been led by the nose by officers.”

Labour and UKIP councillors said they were compelled to approve a housing plan. The meeting was told that Tory MP Sajid Javid, secretary of state for communities and local government, had announced a crack down of councils that fail to submit plans that meets ‘housing need’.

Council leader Gaven Callaghan said: “We will not have any say in this if a development corporation takes over. That threat hangs over us.”

Amendments were made on the night after locals raised objections about the loss of an ancient wood in Billericay and new traveller sites in Vange.

Conservative councillor for Burstead, Kevin Blake said: “I take my hats off to the people of Vange and Frithwood. Because they’ve changed the mind of the committee.”

Mr Baggott said: “Travellers are people. And we have sites where they integrated very well. But having traveller sites attached to a development is inappropriate.”

The plan will go to Full Council for a final vote on Thursday March 22.

One Response to "Across The Border: 18,000 new homes approved"