A TEAM of students from Grays Convent High School have been named the winners of this year’s Thurrock’s Next Top Boss.

Thurrock’s Next Top Boss is a project run by Thurrock Council’s Inspire Youth Hub and gives young people the chance to work with local employers on real business challenges. Teams of students from nine schools and one college took part, putting in months of hard work to claim one of the two awards.

A number of local businesses partnered the teams, who were judged on criteria including their business plan, branding and how they addressed the challenge set. 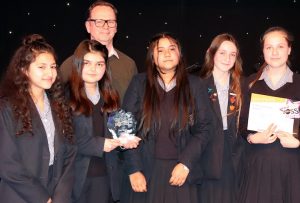 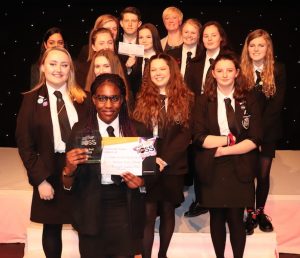 The winning team, called Women Works, were partnered by energy company ENGIE, which set the challenge of creating a strategy that would encourage women into the construction industry.

Web to the Power of 3 from Gable Hall School came second with their entertaining and creative strategy for tackling a challenge set by the sexual health team at Thurrock Council.

Mark Sexton from Lakeside Hammers, who was one of this year’s judges, said: “We were really impressed by the overall standard of entries this year and selecting the winner and runner-up was particularly difficult considering the range of challenges that were set.

“Ultimately the winning team was successful because they really met all of the competition’s criteria: the team created great branding, wrote a well-constructed and on-budget business plan, and, most importantly, completely understood the brief.”

Tiffany Bright, from Thurrock Council’s Inspire Youth Hub, said: “All of the young people who took part this year have an exciting future ahead of them.

“This project is a fantastic opportunity for students and local businesses, and we hope even more organisations will take part when Thurrock’s Next Top Boss starts again this September.”

Businesses or schools interested in taking part in Thurrock’s Next Top Boss can contact the team at Inspire Youth Hub by calling 01375 413 643 or emailing inspire@thurrock.gov.uk.

One Response to "Grays Convent are crowned Thurrock’s Top Bosses"