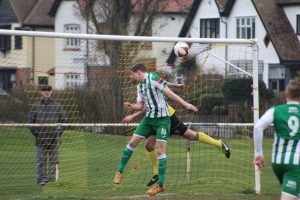 Second half goals from Michael Mignot and Joe Lefley saw hosts West Essex take victory at home to struggling Waltham Forest at Mayesbrook Park.  The hosts were the better side in a goalless first period, as Mignot got  in behind the Forest defence a few times, striking the post on a couple of occasions after rounding the Forest keeper.  The  visitors had to also head an effort off their own line and also almost conceded an own goal as well; they would have been the happier of the two sides going into the break.  However twelve minutes into the second period saw the hosts break through when after great footwork from Brad Russell on the edge of the box, he then found Mignot who dropped a shoulder, bought a yard of space, before finding the bottom corner of the net.  And the hosts sealed the points with six minutes to go when Joe Lefley struck home a brilliant free kick to seal a win that moved the hosts up to 7th ahead of Saturday’s fixtures; whilst for visitors Forest they are still just a point above the bottom four, but have only five games remaining.  And with their next two away to title contenders Basildon United and Redbridge it is looking increasing worrying for the Walthamstow side.

Hosts Burnham Ramblers fought back to two goals down early on to snatch their first point of 2018 against promotion chasing visitors FC Romania at Leslie Field. The visitors went ahead early on through Alexandru Bostina and then Mihai Circiumaru doubled that lead not long after. At that point it looked like another long afternoon for the struggling hosts.  However Julian Bavin gave Ramblers hope by pulling one back before half time, and then with time running out Charlee Hughes netted a late equaliser for the home side, which could be a vital point in their battle against the drop.  However this was a very disappointing afternoon for the visitors who lose more ground to the leaders and remain five points behind second spot.

The Robins netted four first half goals to blow away their opponents at The Old Spotted Dog and remain in 10th spot.  Wick would have been buoyed by their result against Clapton last time out however any thoughts of continuing a rival were quashed by half time as goals from Toby Cleaver, Matt Frew and a brace from Aaron Thomas had the visitors four goals up at the break.  A goalless half then followed as the visitors ran out winners and this result leaves Wick bottom and twelve points from fifth bottom Hullbridge Sports with nine games remaining.

Sports bounced out of the bottom four, and sent Waltham Forest into it, after they thrashed Sporting Bengal United at Lower Road for a huge win. The hosts grabbed a 14th minute lead when a lovely cross from Matt Rose found Adebola Sotoyinbo who struck home, and they doubled this lead six minutes before half time when a poor kick out from the visitors keeper went straight to Luke Hornsley who danced around a defender and slotted home.  And in first half stoppage time Sports grabbed a third when Jimmy Cox headed home a corner, to send the home side into the break three goals ahead.  And just eight minutes into the second half the hosts made it four when a lovely cross from Matt Dicks found Hornsley who headed in his second of the contest, completing  a memorable day for the home side.  Sporting, who had won back to back games prior to this, sit in 14th and six points above the bottom four.

Enfield made it five wins on the bounce after they defeated Ilford at Cricklefield to go into 12th spot and now nine points above the bottom four.  The visitors took a 14th minute lead through Dan Chambers and then doubled this just two minutes later when Ayo Odukoya netted for the visitors after being played in by Barrett. However the hosts then pulled one back in the 24th minute to reduce the arrears after they were awarded a penalty for handball, which Harry Watkins duly despatched.  But in the 68th minute Enfield restored their two goal cushion through Aundre Spencer after Ben Bradbury had fired in a corner and this was enough for the visitors to claim all three points, whilst The Foxes remain ninth after this defeat.

The Motormen defeated one of their promotional rivals Takeley at Oakside and go top of the table as a result. The first goal was always going to be important in this one and it was the hosts who hit the front after 14 minutes through that man Brian Moses, where after good work from Coxi-Sebastfao, his deep cross was knocked back down to Moses, and his lose shot crept through Yates in the Takeley goal and into the net.  And not long after Redbridge doubled their lead through Thomas Gogo, running past two defenders before firing into the far corner brilliantly.  Then a crazy few minutes happened around the 70-75 minute mark when Redbridge forward Moses and Takeley’s Powell were involved in an altercation inside the box, both were subsequently sent off, and Redbridge were awarded a penalty. Gogo sent Yates the wrong way and the hosts had sealed an important three points in the process; whilst for Takeley defeat sees them now 24 points off top spot with seven games in hand, but more importantly 22 points from second place and needing favours now if they want to finish in the top two.

A late Ricky Evans goal salvaged a point for Great Wakering Rovers at local rivals Southend Manor at Southchurch Park, denying the hosts a welcome three points in the process.  After a goalless opening forty five minutes the hosts took the lead ten minutes into the second period as Brennon Nolan found the target. It was looking like a shock defeat for the visitors until Evans netted a 90th minute leveller to grab a point for the visitors,  although they do lose top spot to Redbridge.  For Manor it’s a disappointing draw after conceding so late on, and the point sees them in 13th and seven points above the bottom four.

Barkingside came from behind early on to net a big win against Stansted at Hargrave Park to put some daylight between them and the bottom four. The hosts went in front after just three minutes thanks to a header at the back post by Ryan Ramsey, however the visitors managed to level in the 14th minute through new signing Rob Hodgson after poor defending from the hosts.  And then midway through the second half the hosts went down to ten men after violent conduct, and then saw the visitors compound this by going on to score moments after through Aaron Lesta and to turn the game around.  Barkingside then increased their lead from a Raphael Duyile penalty after a poor tackle inside the box, sealing  the deal in the process, and moving them up to 15th, four points above the bottom four.  Stansted on the other hand sit 16th and just two points above the bottom four after this latest setback.

Basildon United kept the pressure up on the top three with a comfortable win at Kitchener Road against a recently resurgent Wadham Lodge. The Bees took a third minute lead when James Peagram capitalised on a defensive slip to tap home from close range, and the visitors doubled their lead in the 24th minute when Oli Spooner fired home.  They then added a third ten minutes before the break when Peagram’s drilled cross was met by Marcus Bowers who fired home, and on the hour mark it was four for the Bees as substitute Jack Adlington, who had only just come on, netted for the visitors.   The hosts did manage to pull one back with thirteen minutes remaining when Daniel Francis saw a free-kick deflect home, however the visitors took the points to see them eight points off the top two with three games in hand.  Lodge fall to third bottom, two points off fifth bottom Hullbridge Sports.

Dejuane Taylor-Crossdale’s stoppage time strike gave Woodford Town all three points at home to Clapton at Goffs Lane. Woodford went in front with ten minutes remaining when Dion Lewis-Kirwan escaped down the right and hammered a low effort into the far corner, however Sham Raheem found a leveller for the visitors after Reed had slid him through, saw him round the keeper and roll home. But deep into stoppage time Woodford found a winner when Taylor-Crossdale netted his sixth goal in seven games and saw the home side remain 11th, whilst for the Tons it’s five straight defeats now although they remain 6th.