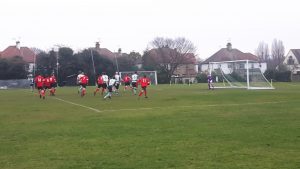 Catholic United and Old Southendian were finally able to get their semi final game played after a series of postponements and it was decided by a solitary goal. Harley Kee fired Catholic United into their third final in recent years, with Buckhurst Hill now waiting in the all-Olympian Final.

Corinthians U21s finally lifted the Essex Junior Trophy after a titanic encounter with Sandon Royals that went to extra time, before the Olympian U21 title chasers won the game via a penalty shootout. The Royals almost took the lead in the 13th minute when a Paul Harvey cross was tipped onto the cross bar by Brad Read; however four minutes later Adam Fishpool connected with a Dave Muir free kick to place Sandon into the lead. But Corinthians equalised in the 40th minute when a cross from the right was slotted home by Matt Burrell. Cameron Glover went close for Corinthians as half time approached but there was enough time for Corinthians to mount another attack before the break, with a Connor Summerhill cross sneaking past Andy Rodgers to give Corinthians a 2-1 half time lead. Sandon Royals levelled inside eight second half minutes when David Kavanagh headed them level; and ten minutes later when Adam Fishpool beat Read to a ball and was able to nudge the ball in. John Bolton-Smith then equalised in spectacular fashion with his half-volley crashing into the roof of the net. There was late drama in the final stages of normal time as Paul Willmore had a low shot tipped around the post by Read, before Corinthians went up the other end and saw a Billy Harris effort crash against the cross bar. Sandon were to go ahead in extra time when a cross found Antonio Campoccio who slammed his effort into the net. But Corinthians almost found an instant equaliser as Connor Monaghan heading a cross against the cross bar. As it was Corinthians found a late equaliser through Theo Cannon before keeping their nerve to win the penalty shootout 3-2 and with it a remarkable achievement in becoming only the second U21 team to lift the Essex Junior Trophy.

Frenford open up an eight-point lead at the top of the table after a 3-0 win over Rayleigh Town. Brad Foley, Bradley Nobbs and Luke Woodward scored the goals that now place Frenford in a good position to land their first Premier Division title since the 2012/13 season. Last season’s Premier Division Champions Springfield picked up all the points at Bishop’s Stortford Swifts that sees them up to third. Ross Lamb scored twice in the 3-1 success with Louis O’Sullivan the other scorer. Jermaine Hughes scored the Swifts reply. Tom Hollingsworth bagged a hat-trick as Leigh Ramblers secured a 3-0 win at Kelvedon Hatch; meanwhile Tom Phillips scored a brace for Canning Town but still ended up on the losing side as Manford Way went on to win the game 3-2.

Buckhurst Hill went in at half time against Snaresbrook a goal up courtesy of a Nathan Sollosi goal. The same player then doubled the lead early in the second half, with further polish being applied by Jose Espinoza and Josh Addinall. The 4-0 win means that Buckhurst Hill now return to the top of the table, with games in hand over their nearest rivals Great Baddow. Hutton were held to a 1-1 draw by Shenfield AFC which keeps them third and five points behind Great Baddow who occupy the other promotion spot. George Cunningham scored the Shenfield goal with Hutton’s goal coming via Keelan O’Donovan. Runwell Sports and Galleywood both occupy relegation places and so their game had a lot riding on it; both teams needed a win to bolster their relegation fight, but in the end they had to settle for a point each as their game ended goalless.

Glen Jordan notched a hat-trick in Herongate Athletic’s 4-1 win over Upminster which places them very nearly over the line. Chris Carr scored the other goal for the Division Two leaders who now have one game left to play with the Title also within their grasp. Upminster replied via Alex Bessent and sit just one place above the relegation zone, however they have a two-point advantage and two games in hand over Rochford Town. Ryan ended their campaign with a 7-0 defeat at home to Benfleet who had Ben Foord hit the net four times. Sam Dulieu scored twice with Micheal Reed also notching. Ryan finish bottom of the table and therefore are relegated, meaning that there is now only one relegation place left to be decided. Ricky Gill and James Braithwaite both scored twice apiece, with Billy Field the other Rayleigh Town Res. scorer in a 5-3 win over Ongar Town. A1 Sports also put five past Newham United, who at least managed to score a consolation along the way.

Shoebury Town are within touching distance of securing promotion after they won again on Saturday. Leytonstone United were the hosts but went on to see their visitors hammer 13 goals past their keeper. Dom Binns was the main protagonist, going on to score seven goals. George Dansie bagged a hat-trick, Scott Clark scored twice with Kirk Hudson also hitting the target. Leytonstone at least managed to score a consolation to prevent a total whitewash, with their goal being scored by George Welsh. Harold Wood Athletic Res. handed Roydon a 4-1 defeat with Tom Lamb, Dal Wettner, Jake Hendy and Sam Bissue providing the goals. Roydon’s consolation was claimed by Connor Ellis. Jack Shaw scored twice for Hutton Res. who were held to a 3-3 draw by Old Chelmsfordians Res. Rob Lorkins was the other Hutton scorer with Eliott Walker (2) and Tinsley Gardiner the Old Chelmsfordians marksmen.