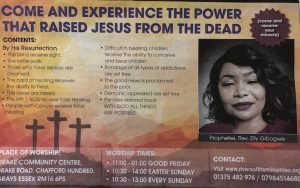 A CHURCH based in Chafford Hundred has defended its controversial claims made in an advert for their Easter Services.

The Rivers of Life Ministry has a number of services over the Easter period at the Drake Road Community Centre in Chafford Hundred.

The event is promoted as: “Come and Experience The Power That Raised Jesus From The Dead (Come And Receive Your Free Miracle).

YT contacted the church and spoke to Vincent Gibogwe.

We asked Mr Gibogwe if he could name a person whom, declared clincially dead, had come back to life. He said he could and would get the details for us. We also asked him if he stood by the assertion that people with incurable illnesses such as AIDS could infact be cured. He said he did.

YT then asked that if a reporter attended the services could they pick up their “free miracle”? Mr Gibogwe said: “You probably won’t be receiving a miracle as you don’t believe”.

We offered our contact details so that he could send us details of the person (s) who had been raised from the dead, cured of cancer and cured of AIDS but he declined.
He said: “You can find it on Google or Youtube”

The building is owned by Thurrock Council but they do not have any role in the day to day running of the community centre. We spoke to one member of the management team at Drake Road who expressed their concerns over the advert.

YT also understands that one Thurrock resident has made a complaint to the Advertising Standards Authority (ASA) about the church’s advert.