Ten years ago, we interviewed Squadron Leader Ian Blair DFM. His act of bravery was remarkable. What was as remarkable was how self-effacing he was.

During the war, he was on board a Blenheim Bomber when the pilot was killed. Ian took over the controls and flew the plan for two hours before landing it safely, saving many lives. The miracle was that Ian never properly flown a plane! He received a Distinguished Flying Medal (DFM) for his bravery and went on to fly and fight bravely for the rest of the war. That is, after the RAF ordered him to take flying lessons!

Ian joined many of his colleagues at the Battle of Britain 70th commemorations and the VJ celebrations at Purfleet Heritage Museum in 2008.

Here is his interview. 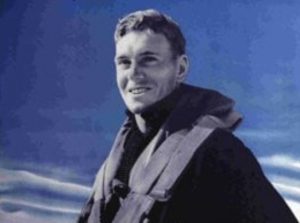 One Response to "RAF at 100: When WW2 hero Squadron Leader Ian Blair DFM came to Thurrock"