ESSEX Police are appealing for anyone with information to come forward, after four people tried to steal an ATM from a shop in Lampits Hill, Corringham.

They were called at 1am this morning, Sunday, April 1, with reports of activity at Lampits Hill Food & Wine. 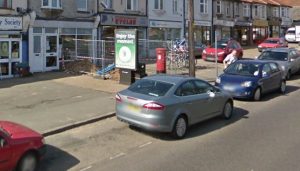 Witnesses heard banging and it is believed the men entered the store by smashing the glass in the front door using a long handle axe.

The ATM was damaged and was partially detached from the wall.

They drove away in the direction of Gifford Cross on Manor Way.

Detectives would particularly like to speak to anyone using the ATM between midnight and 1am this morning, as well as anyone who drove past the location at the time of the incident.

Please contact the police on 101 if you have information which could help the detectives running the investigation. You can also contact Crimestoppers anonymously on 0800 555 111.