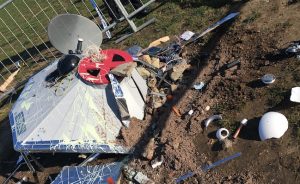 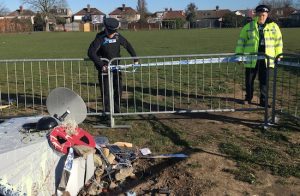 CHILDREN from reception to year six took part in The Great Deneholm Write Off.

It was the second whole school writing week and its aim was to raise the profile and enjoyment of writing.

A spokesperson said: “We know that the children find writing easier when they write for a real purpose so setting up a scene like we have certainly inspires them.

“Each year group will take the writing in a direction that inspires them. We are expecting letter writing, wanted posters, scripts for news casts, instructions for sending an alien back to space and character descriptions.

“Whilst the children were in assembly a UFO crash landed onto our school field. A forensic scientist and police officers (volunteers from Thurrock Police) were quickly on the scene. From behind a police cordon the children studied the wreckage. Evidence from the scene was bagged up and shared with classes so that they could help solve the mystery! The buzz from the children was phenomenal. They spoke about it all day and many couldn’t wait to get to school today to write about it!

“It has been a real winner with the children.

“This wouldn’t have been possible without the craftsmanship of Ian Storey who built the UFO and the help of Ray Bradfield (scientist), parent Debbie Whitfield and friend of the school Pauline Storey”.